In February this year, we photographed A$AP Rocky live on stage at the Hordern Pavilion in Sydney. We’re longtime A$AP Mob fans and the gig was great – you can see the whole gallery here.

On March 5, A$AP Rocky posted an image on Facebook, teasing a freestyle over a Phantogram track:

The photo looked a little familiar, so we checked our gallery. 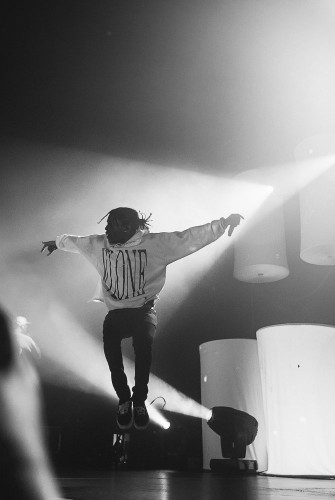 We’re no strangers to artists stealing our photos. I can’t count the amount of times that we have had to contact a publicist or a label about an artist posting a Howl & Echoes photo to Instagram or Facebook without crediting the photographer or website. It’s happened twice in the past 72 hours alone.

It’s frustrating as hell, on a number of levels.

Firstly, expecting credit for a photo is hardly selfish or harsh. It’s a simple professional courtesy. We work hard (and without pay) to write about, and take photos of the artists that we love. Writing and photography is every bit as much a creative art as music. Our photographers work their asses off to produce phenomenal images of the artists we adore. It’s not okay for people to steal songs or a sample, and it is not okay to steal a photo.

Secondly, it’s not exactly difficult. We all know how to use Instagram and Facebook, we all know it takes approximately one second to tag a photographer, and for management or the artist to come back claiming that it can’t be edited, or that their social media manager doesn’t want any credits or tags in their caption, is bullshit. Much like you add production and feature credits to a song, or you credit a sampled beat, a photo is the creative property of the the photographer, and they need to be acknowledged.

Thirdly, it is copyright infringement and there are legal consequences. Unless a contract has been signed giving up rights, a photographer always retains copyright ownership over the image, much like a musician and their song. This is no secret, but the problem within online music photography is that most of us get paid zilch, and couldn’t afford lawyer or court fees, which many artists and managements undoubtedly know, allowing them to exploit our creative property without caring much about the consequences. 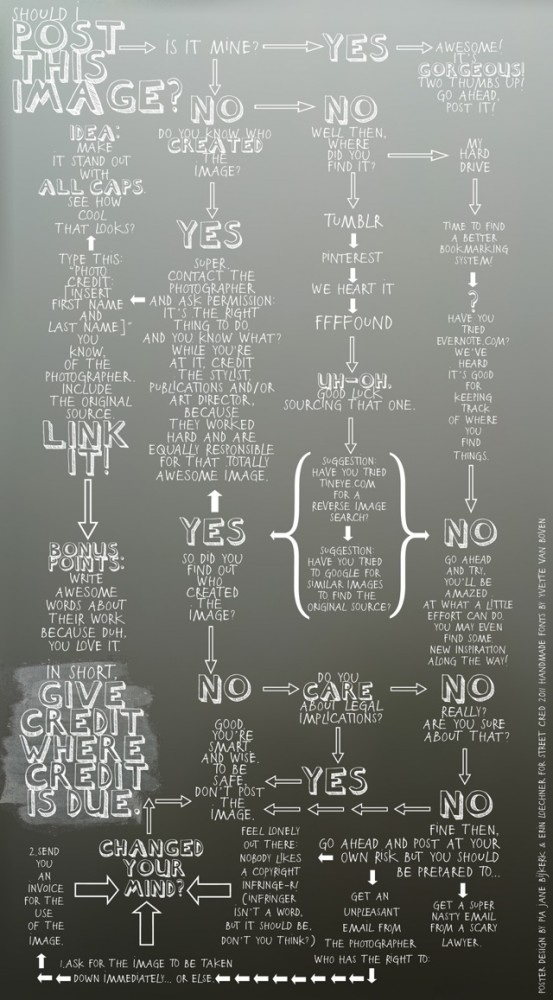 There’s been a number of cases of late which have blown up like this. Just last week, Young Thug was caught stealing his Slime Season 3 artwork from a young artist. Taylor Swift was called out once over stealing an artist’s design to promote 1989, ironically after she very publicly slammed most streaming services for music piracy. Drake straight up ripped someone’s Instagram artwork last year, and Diplo stole an artist’s GIF last year – which he responded to with appalling misogyny, but that’s another story for another day.

So why is a photo any different? Why is it okay to use a photo that you didn’t ask for or pay for, and to use it for promotion, without asking, acknowledging or compensating? If I stole one of a beat without crediting the producer, would that be fine?

Most of the time, an artist or their team contact us to request reposting a photo with credit. When photos are used without asking first, the issue is almost always resolved with a quick email to an artist’s PR or management. We’re proud of our photography and we’re always excited when people not only check it out, but love it so much that they want to share it with their fans.

Back to A$AP Rocky. As soon as we discovered the photo – which, to reiterate, has been edited and used for promotional purposes on social media and Soundcloud – we contacted his label, who have been really helpful and apologetic on their behalf. Yet almost a full month later, we haven’t heard anything back and the image is still on social media.

To be clear, in this particular instance we’re legally prohibited from being compensated, as our photographer signed a release form which stated that none of the photos can be used for promotional purposes, or essentially anything other than on-site editorial. What this means is that A$AP’s team are currently violating that contract, and if we were compensated then we’d be violating it too. So this specific photo needs to be completely removed. But this is rare; 90% of the gigs we shoot do not have any release forms or legal stipulations, and we’ve never been asked to give up copyright ownership of a photo.

Howl & Echoes is a small website. We earn practically nothing, we can’t pay our writers, photographers or ourselves. A photo is no different to art – especially when there’s a signed contract involved. It is not okay to steal music or art, and it’s not okay to steal a photo.