Kanye West is the kinda man who inspires artwork. Namely, a mural of him kissing himself painted on a wall in Teggs Lane of Chippendale, Sydney; something which would no doubt elicit slightly confused feelings from the rapper.

Called “Kanye Loves Kanye”, the painting depicts an amorous display of passionate kissing between the two Kanyes, with the taller one groping the bum of the shorter Kanye lasciviously, inspired by an actual photo of him and wife Kim Kardashian that was circulating the web a while ago.

Despite the widespread viral popularity of the mural, Australian artist Scott Marsh has apparently been asked by someone on Yeezy’s management team to remove the mural.

Speaking to ABC’s 702, Marsh said that one of Kanye’s reps had reached out and offered him a “pretty decent chunk of money” to paint over the provocative mural. 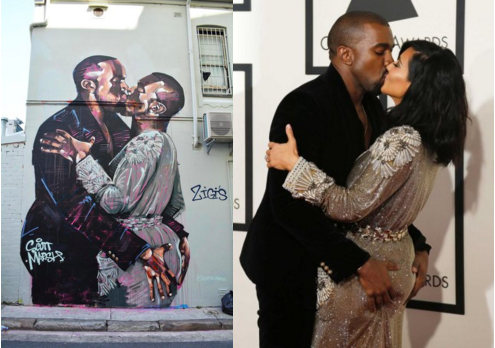 Marsh responded in the most Kanye fashion possible – by asking for six-figure payment for a print of the painting and a lifetime supply of Yeezy Boost sneakers.

“I’m offering an oversized print which has been painted over for $US100,000,” Scott Marsh told the radio station.

“It’s an open invitation to Kanye. If he buys that print then I’ll paint over the mural…Me, personally, I love graffiti, I love it all. The thing I like about it is that it’s unsanctioned. It’s probably one of the last pieces of free media and I think that’s the whole point of it. Whether you like it or not, it’s art. So some people like it, some people don’t. It’s all open to interpretation.”

Marsh even had the gall to the goad Kanye over social media, posting a video to Instagram of someone painting over a print of the mural. He has given West just two weeks to buy a print from online art store 1XRun.

Yo @privatekanye !! the $100K print is still available! Only 6 of the 16x24inch prints remain. follow link in bio @1xrun

Despite the tongue-in-cheek nature of the mural, Marsh claims he’s all for West. “I’m actually a huge fan of Kanye, I reckon he’s awesome – he’s a character, he’s super-talented,” Marsh told the Guardian Australia. “You’ve got to have that – I guess it’s arrogance – but you’ve got to have it if you’re going to be successful on that kind of level. You’ve got to back yourself.”

While the mural depicting the Kanye-on-Kanye romance has supplanted the picture of Kardashian smooching West, she lives on in a piece of artwork herself. Just a stone’s throw away is another mural painted by Melbourne based street artist lushsux. This painting depicts Kim Kardashian naked, based off a photo the reality TV star released last month.

Standing two stories high, the mural covers the side of Zigi’s Art, Wine and Cheese, and has already earned the ire of local authroties. The City of Sydney has told the bar owner Zigi Ozeri he has 14 days to remove to the mural, or else. A neighbour who isn’t a massive fan of the artwork submitted a complaint, meaning that Ozeri could face a $3000 fine for failure to submit a necessary development application. Funnily enough, ‘Kanye loves Kanye’ has received no such complaints yet.

Artist lushsux, real name Mark Walls, also painted another mural of Kardashian, this one down in Melbourne, depicting her infamous nude Instagram selfie, which spiked a massive dialogue around the world about slut-shaming and a woman right the free sexual expression.

Naturally, the mural was quickly defaced with words like “slut” and “whore”. Despite the tasteless act, the painting has since gone to gain the approval of Kardashian, endorsing it on her website. Even the local council has gotten around it.

Melbourne seems to be a little more appreciative of street art than the bureaucratic quagmire that is Sydney City Council. According to a council spokeswoman, murals need to gain “development consent” and require “consultation with neighbours”, before they can go up. Takes a little bit of spontaneity out of it, if you ask me…