Today is a historic day for the NBA. Not only did the Golden State Warriors beat the 1995-1996 Chicago Bulls’ long standing record for most wins in a season (73), but Los Angeles Lakers Kobe Bryant, one of the greatest basketballers to ever grace the court bowed out with 60 points and a five point win over the Utah Jazz.

Praise for Bryant’s achievements has been universal and come from all corners of the media and celebrity circles, including the hip-hop world. Anyone who’s a fan of either knows the close association basketball and hip-hop has. While basketball has always been huge in the States, the sport went up another level in the 1980s as hip-hop culture began to take shape. The popularity of the two wasn’t the only similarity, with basketball and hip-hop both originating from the streets and focusing on individual talent, often within a team or group environment.

As basketball and hip-hop grew into multi-million dollar industries during the 1990s, it was seen as a way out for members of the black community struggling to make ends meet while surrounded by rising gang violence. These days, the two are intertwined, with your favourite rapper’s and basketball player’s often seen hanging out together in nightclub VIP sections. Stars like Drake  (the official ambassador for the Toronto Raptors) and Jay Z (an integral part of the Brooklyn Nets move from New Jersey back to Brooklyn) have become heavily involved with their home clubs. History lesson aside, Bryant’s retirement is a special event that’s led to numerous tributes from high profile hip-hop stars that you can view below.

As an L.A. native, Kendrick Lamar is an obvious Bryant fan, and the Compton rapper recorded a tribute to 37-year-old entitled Kobe Bryant: Fade To Black. With Lamar’s untitled 7 playing the background, K-Dot speaks on not only the impact Bryant had on him, but also his city and the wider NBA community.

Lamar was also joined at the game by good friend and Black Hippy member SchoolBoy Q and New York mogul Jay Z, with the there posing together for a picture on the NBA’s official Instagram page. Jay looks particularly stoked to be at the game. 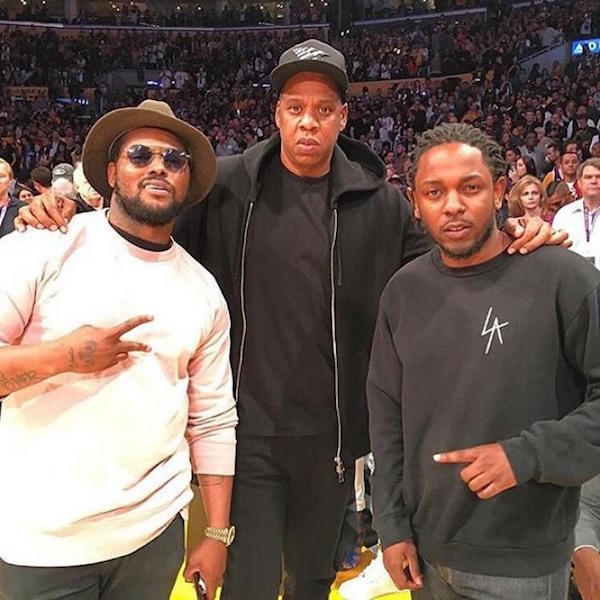 iLoveMakonnen has been dropping tunes like it’s going out of fashion this week, and today he paid homage to Bryant in the form of the thumping Black Mamba Freestyle. Produced by regular collaborator Danny Wolf, Makonnen drops references about Bryant’s illustrious career, including the famous three-peat (2001-2003) and his five championship rings.

Lil Wayne has always been an admirer of Bryant for many years and was one of many celebrities in attendance at the game. Wayne took to Twitter to announce the L.A. legend as his “Favourite player forever!” and posted a picture of him and Bryant holding one of the Laker’s five title winning trophies from the Black Mamba era. But this isn’t the first time Weezy’s professed his respect for the sporting titan, having released tribute track Kobe Bryant from 2009 mixtape Tear Drop Tune 2.

Chicago native Kanye West made sure he was centre of attention with his custom made “I Feel Like Kobe” long sleeve tee, inspired by his The Life Of Pablo merchandise. The back of the yellow tribute tee was emblazoned with the phrases, “Los Angeles Lakers”, “Mamba Day 4.13.16.,” and “Kobe Bryant Lower Merion’s Finest,” in Old-English font. Hopefully these will be available soon because I want one. 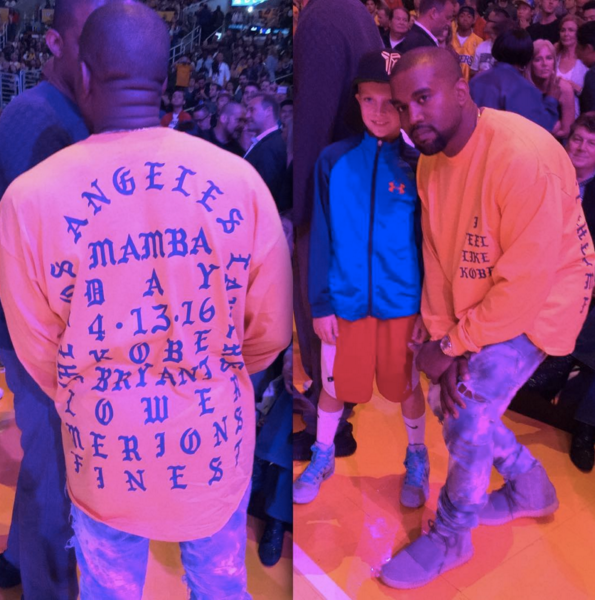