The threat of terrorism in today’s society is perhaps as imminent as it has ever been.

For Damon Albarn, however, this must come as no surprise. Even in July 2005, in the aftermath of the London Bombings, he was indignant at the suggestion he might be shocked by the attack. “How can we be shocked by that?” he challenged in an interview with Notion magazine. “When there’s just an endless newsreel of stuff twenty times more shocking every day. Why is it any different here than it is there? It’s no different. We’ve just got better emergency services to mop up the mess.”

Rewind two months to the release of Gorillaz’s second album, Demon Days, and you find political statement and prophecy in equal measure. Beneath its creepy aesthetic and volatile sonic terrain, Demon Days is a brooding, darkly-themed album. Lyrically, it’s dense in metaphor, ambiguity and implication, and it provides a grim assessment of the state of the world, coloured by Albarn’s own fears of impending global crises. 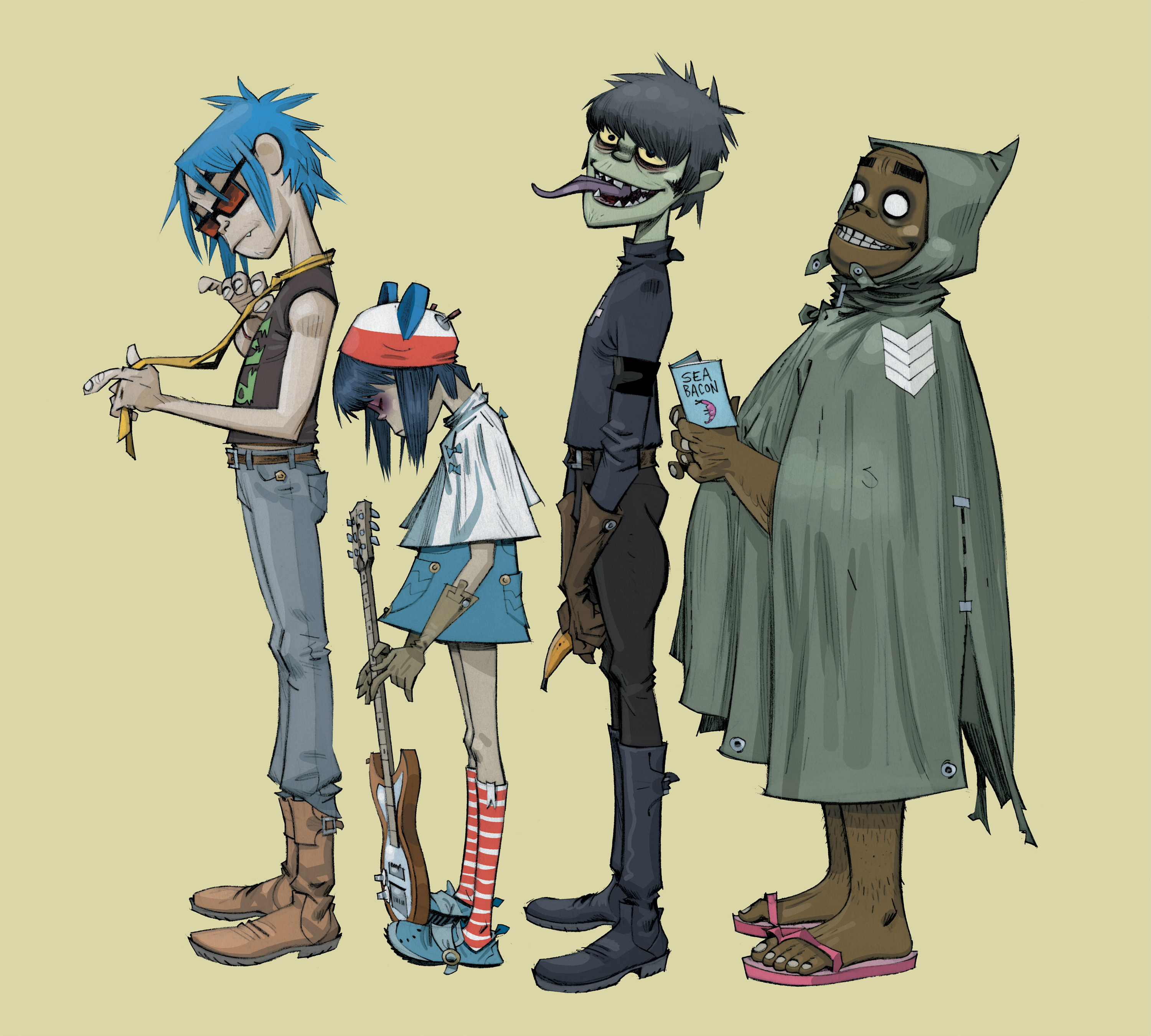 Are we the last living souls?

Intro – which hints at some of the themes to come – leads into Last Living Souls, the blipping, metronomic rhythm of which wouldn’t be out of place on a hip-hop track. Its blatant post-apocalyptic tone exists alongside a wealth of musical ideas; the creativity flows freely and rapidly from Albarn (who voices the band’s goofy frontman, 2-D) early in the record.

Much of his inspiration was derived from a train journey he took to Mongolia via Beijing. The intervening wasteland of the Gobi desert, with its crumbling, barren earth and eery satellite towns, took hold of his imagination. The future he envisaged is not a pleasant one. Kids With Guns evokes images of child soldiers and, closer to home, the desensitisation of a generation to violence. Musically, it features one of the several beautiful basslines bestowed upon Demon Days, as well as a magnificent crescendo of looping keys and crashing cymbals. O Green World is a teeming mosaic of concepts, each vying for the most attention. In the opening seconds alone, reverberating bass lies menacingly below overtly taut, simplistic guitar and shrill synth.

O green world,
Don’t desert me now
Bring me back to fallen town
Where someone is still alive

Albarn’s debut Gorillaz release – 2001’s self-titled, genre-bending effort – was quite successful in itself, but, crucially, was also viewed as something of a gimmick. That’s probably inevitable when you create a cartoon band. Nevertheless, it meant that Demon Days had a point to prove: the Gorillaz project is no joke. Dirty Harry – a sequel of sorts to Clint Eastwood – demonstrates this perfectly. Its irresistible rhythm and choral interludes, plus the lyrically poignant feature from rapper Bootie Brown, whose verses focus on war from the perspective of a desert soldier, construct a song with sinister presence and unerring purpose.

The war is over
So said the speaker
With the flight suit on
Maybe to him I’m just a pawn
So he can advance
Remember when I used to dance
Man, all I want to do is dance

To my mind, there are few songs that begin more memorably – more arrestingly, even – than Feel Good Inc. New York trio De La Soul feature prominently throughout Gorillaz’s second album but never more strikingly than in the wicked introductory laugh of Maseo. It’s iconic. That roaring, unforgettable laugh is just one of many aspects that made Demon Days such a resounding triumph for Damon Albarn and his animated friends – the ghoulish creations of cartoonist Jamie Hewlett. Feel Good Inc., which also features one of the most recognisable basslines of the 21st century, is representative of hedonism and corporate greed, another mesmerising chapter in ‘Damon Albarn’s Big Book of Pessimistic World Views’.

El Mañana (Spanish for ‘tomorrow’ or ‘the future’) is the album’s most tender moment, and perhaps also its most ambiguous. It yearns and aches, adding a dimension of sorrow to a record of tremendous thematic and emotional potency. The message here appears, again, to be one of war and the devastating permanence of its impact. Taken more literally, though, it could also be about a personal demon, something along the lines of unrequited love. More compelling is the suggestion that Albarn chose the title deliberately for its multiple meanings. The dreaded distant future could, in fact, be tomorrow, while la mañana means ‘morning’, perhaps implying that that bleak future is already happening.

I saw that day
Lost my mind
Lord, I’m fine
Maybe in time
You’ll want to be mine

After the strutting twang and ragtime piano (contributed by the late American soul legend Ike Turner) of Every Planet We Reach Is Dead, MF Doom raps with poise about gang violence and death in November Has Come. All Alone reverts to the theme of war (in this case, I reckon George Bush Jr.’s unsupported, foolhardy venture into Iraq), while White Light is a breathless, disconcerting view of alcoholism/addiction/death/all of the above. You choose.

Disarming in its optimism, Dare is the band’s only number one single to date. It deviates from the usual Gorillaz format by being centred around the vocals of Noodle, the band’s female, Japanese guitarist. It also features the thick Manchester brogue of Shaun Ryder, who appears in the music video as a disembodied head hooked up in Noodle’s room.

Next comes the peculiar (mostly) spoken-word track, Fire Coming Out of the Monkey’s Head, which utilises the voice of late American actor and filmmaker Dennis Hopper. Ultimately the track’s meaning is open to conjecture, but there is an unmistakable parallel with American occupancy of the Middle East and the war for oil, a topic apparently at the forefront of Damon Albarn’s mind at the time.

… soon they began to mine the mountain, its rich seam fuelling the chaos of their own world. Meanwhile, down in the town, the Happyfolk slept restlessly, their dreams invaded by shadowy figures digging away at their souls.

The darkness swiftly recedes for the lullaby-like Don’t Get Lost in Heaven, before the title track, a suitably bizarre gospel summary of events, brings proceedings to an end. Demon Days will forever be one of my favourite albums. Sonically, it defies categorisation at every opportunity, flitting expertly between genres and collaborating with masters in each. It captures the complexity of human emotions amid the turmoil of a dark and dangerous world – with cartoons. If that’s not genius, nothing is.

This year will finally see a new record from Gorillaz, six years on from Plastic Beach and The Fall. The world has changed since Demon Days, but not necessarily for the better. The same dark clouds of terror loom, and the future looks bleak from certain perspectives. Whether that still includes the perspective of Damon Albarn, I’m not sure, but this year’s release will be an insight into that, and more, as the twisted virtual narrative of 2-D, Noodle, Murdoc and Russel rolls on.