After recently announcing a national tour with close collaborator Future and releasing the album artwork to Views, Toronto native Drake has now dropped the tracklist to his upcoming project through his Instagram.

Originally titled Views From the 6, it definitely looks to be quite a bold project; with 20 tracks (including the bonus) it could easily be Drake’s largest release yet. Among the tracks featuring on the album are the already released One Dance, Pop Style and the leaked Controlla, along with the massive 2015 hit Hotline Bling appearing as the album’s bonus track. His track Summer Sixteen didn’t seem to make the cut, and looks to have just been released as a standalone single.

Following the hype from the OVO BBK signing and recent collaboration with the UK show Top Boy, fans have closely been awaiting the announcement of a new Drizzy/Skepta track. After the Konnichiwa tracklist didn’t deliver, we’ve been left to assume they link up on Views. Whether this is the case or not, we’ll just have to wait and see.

The album will be premiered globally on Drake’s Beats 1 radio show tomorrow 7pm PT, that’s Friday 12pm AEST. Views officially drops Friday, April 29, so whether Australians can access the album early we’ll soon find out. In the meantime though, checkout the tracklist below. 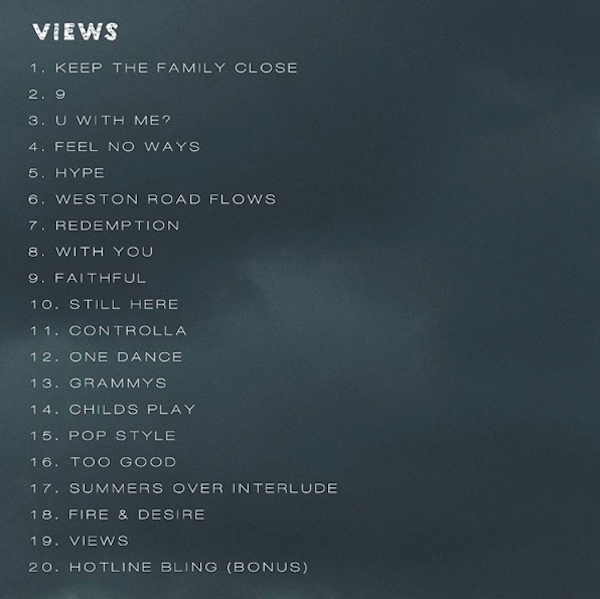