Bruce Springsteen is the latest artist to boycott the recent anti-LGBT laws passed in North Carolina, cancelling an upcoming concert via Facebook post this morning. The laws in question include the absurdly archaic “House Bill 2″, implemented to force transgender people to pick a male or female public bathroom according to their biological gender at birth, and stipulations which essentially make it easier to discriminate against LGBT people in a workplace – you can read more about it here.

Springsteen’s statement explains that the law “dictates which bathrooms transgender people are permitted to use,” and that it”also attacks the rights of LGBT citizens to sue when their human rights are violated in the workplace. No other group of North Carolinians faces such a burden.

“To my mind, it’s an attempt by people who cannot stand the progress our country has made in recognizing the human rights of all of our citizens to overturn that progress.”

“Some things are more important than a rock show and this fight against prejudice and bigotry — which is happening as I write — is one of them. It is the strongest means I have for raising my voice in opposition to those who continue to push us backwards instead of forwards.” 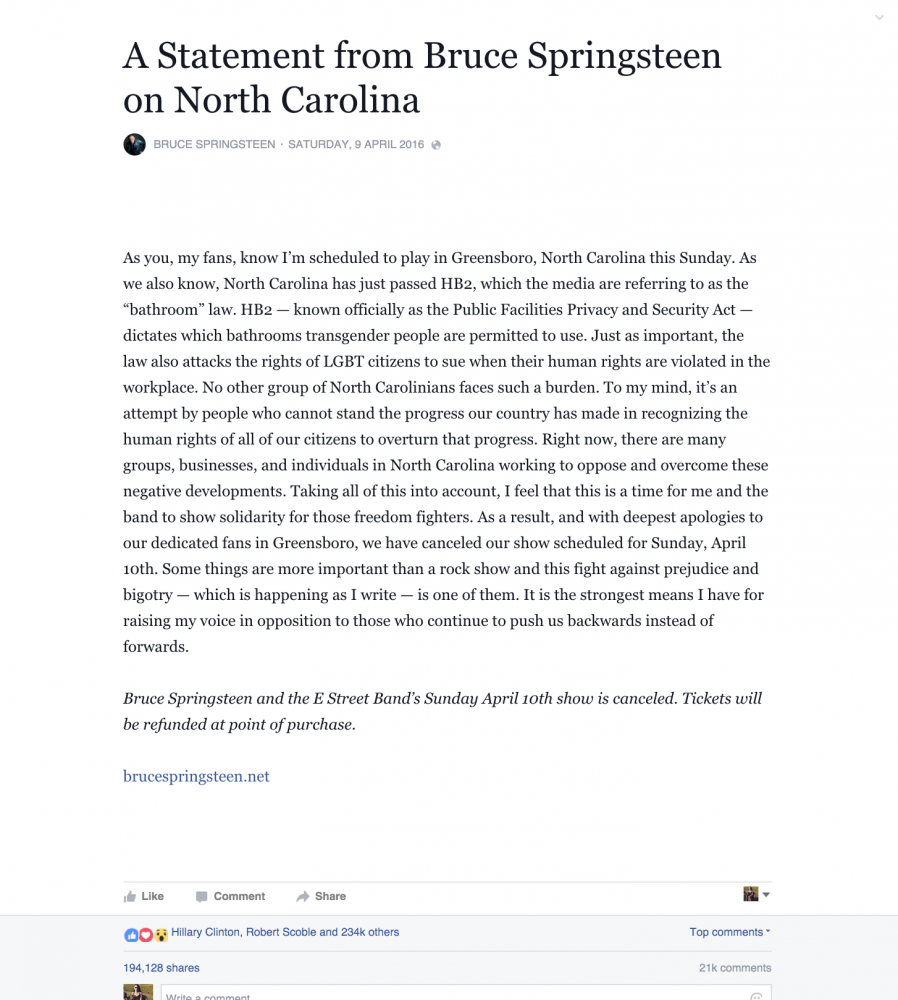 Springsteen is not the first artist to cancel a show in protest – last year, Wilco cancelled a show in Indiana over anti-gay religious laws, while a number of film stars including Anne Hathaway and Seth MacFarlane recently threatened to boycott the film industry in Georgia for the same reason. Some of the world’s biggest companies, including Apple, Facebook and Bank of America have also criticised the laws.

Springsteen’s guitarist Steven Van Zandt also weighed in on the decision, telling the media at the Rock & Rock Hall of Fame ceremony this week, “We just felt the issue was just too important… This really vile and evil discrimination is starting to spread state to state and we thought … we better take a stand right now and catch it early, and set some kind of examples for others.”

Others have chimed in to support his decision via social media, including presidential candidate Hillary Clinton, who ‘liked’ the above Facebook post.

One more incredible reason to love Bruce Springsteen.Your integrity is inspiring! From one boss to another @springsteen thank you for NC! XO

Hey @springsteen you make me proud to be a new jerseyan.

Just when you couldn't love @springsteen anymore! What a man. pic.twitter.com/AT1ChPnE77