Lucianblomkamp’s sophomore album Bad Faith is a dramatic, tumultuous journey through the darkest realms of electronic music. I love every single moment of it.

Bad Faith is meticulously crafted in a manner which flows between three main gears: ominous, experimental soundscapes, industrial, progressive goth bangers, and vocal-laden melodic brooding. As shadowed, heavy and at times stressful as it is, it flows fluidly from track to track, almost like a continuously running soundtrack to either (or both) an obscure science fiction film, or a dark, post-apocalyptic coming-of-age drama.

The devil is in the details on Bad Faith, most notable on the tracks where unstructured soundscapes seem to unravel, including the intense opener Decay and the cautious, precariously experimental Sea of Fog, two expressive minutes which sound more akin to an electronic brother of Godspeed You! Black Emperor than your typical electronic record. It may seem strange that I’m focusing on the in-between moments before delving into the more structured songs, but these feel like more than just a backbone or connector tracks. These moments are vital; they design, create, and engulf the listener within the landscape. They induce an atmosphere, a sticky grey wilderness, eerie and dangerous, mysterious yet enticing.

Every single track, even the most straightforward vocal numbers (‘straightforward’ must be considered with great relativity on this album) see Lucian testing sound, pushing chords, seeing how far they can go and what kind of feeling they create. If the more structured tracks are the answers, these connector tracks are the sums and equations he’s used to get there.

That said, I’m as much a banger fan as I am of explorative instrumentals. The techno-heavy synths of the progressive Eleven & 22, on which it feels like Lucian is trying to show off as many synths and sound effects as possible – yet, while this seems overbearing on paper, it flows perfectly naturally. Crowning moment and easily his best single to date, The Overman, is the kind of track that would make even the most corpse-paint-adorned goth move his feet. Opening on melodramatic synths, the haunting chords soon give way before to a deep, grinding beat and Lucian’s signature affected vocals. For just over five minutes, I feel transported. This is a phenomenally dark, intricate single, easily one of, if not my favourite electronic piece of 2016 so far.

The vocal tracks have an almost polar opposite effect to the instrumental tracks. Interestingly, when we chatted to Lucian late last year, he told us that he “actually made the entire album with instrumentals first… It was part of the process to add the lyrics in later.” Even more interestingly, he revealed that he actually wanted to have no vocals on the record. “I think lyrics can often be a disservice to a good song,” he said, although concluding that, “it was bizarre how naturally it happened… It kind of just made sense. I would have ideas for lyrics that would be floating around in my head when I’d be making the instrumental, but it just seemed like the way I had written everything almost lead to a more “vocal” approach. Just having more of a lyrical aspect to it, in some kind of weird evolution of my music which isn’t a direction I thought it would take, but it just seems right now.

With that in mind, the vocals, heard on tracks including From Afar, the acoustic guitar-laden Feel and Nesimahs almost feel like the most consistent aspect of the album. While not every track features them, whenever they do, they sound similar. To that effect, the vocals are almost comforting; steady ground in an overwhelming sea of fog. Of course, the exception here is on Living In The Wake, featuring guest vocalist Rosebud Leach. A beacon of feminine inflection, lighter in tone but certainly not in atmosphere, this track feels spookier, more ethereal. Were this a film, this song would be written for the scene where a character is expelled into the deathly black of a starless universe, only to be rescued by their lover, who must heroically brave the freezing chasms of deep space. It would probably be in slow motion.

Listening to Bad Faith, I keep feeling as though Lucian is pitting opposing sounds against each other, brewing concoctions which create one universe in an album. Feel is dark and emotional, sans percussion, set amongst swirling, whooshing synthetic effects, as though panning across a sandstorm. While the track prominently features an acoustic guitar, it is as though this melody is playing at a distance, while the storm swirls overhead.

I can’t help but continuously compare this album to Radiohead; while the overall output is entirely different, there’s elements – notably the experimentation between ambience, organic instrumentation and strong electronic beats, which draw me back to the sounds of OK Computer, Kid A and Amnesiac in the way that they toyed with shadows and light, with structure, rhythm, and lack thereof.

The sheer variety of instrumentation and sonic exploration is something to behold throughout Bad Faith. From techno synths to acoustic guitars to strings, from thumping beats to droning, funerary chords which take their time to form, it’s incredible that so much can be packed into an album which flows so well.

Bad Faith is tremendously thought-provoking and musically stunning. As I listen, I am equally fascinated by, and immersed within an atmosphere which somehow manages to constantly change and evolve, while maintaining a kind of thematic consistency that almost forces me to start the album again when it concludes with the nearly six-and-a-half-minute closer, Eternal.

This album is solace for the tormented soul. Thoroughly designed for headphones and full volume, it is wonderful from start to end. 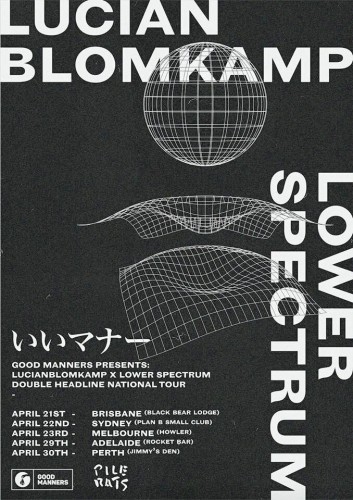