The Freddie Gibbs show at Max Watt’s in the Melbourne CBD on Saturday, March 12 came at an eerie time. Whilst Gibbs fans were holed up in the underground venue, something strange was happening just outside on Swanston Street. Hundreds of young men had occupied Flinders Street Station and Federation Square. The media is now reporting that the young men were members of a gang from southern Melbourne. Fights erupted between rival gang members in the middle of the street. Police resorted to capsicum spray and batons to break up the fighting.

The confrontation in town was apparently organised to coincide with Moomba festival. The same gangs have been accused of similar antics during Melbourne’s White Night and New Years Eve. Civilians weren’t safe either, with reports of brawlers throwing chairs at bystanders.

ABC news reported that chants could be heard of “fuck the police” and “it’s a public space, we have a right to be here.” Meanwhile, inside the venue, Gibbs used the exact same phrase as his go to call-and-response to incite the crowd. “Say ‘Fuck the Police’” said Gibbs, to which the crowd enthusiastically responded “Fuck the Police!” It was a safe piece of crowd interaction that never failed to excite. When I exited the venue I discovered police standing shoulder to shoulder to block off access to Flinders Street Station. Hundreds of young men stood on Swanston Street just outside Max Watts. A friend of mine approached a young guy and asked him for a lighter. My friend asked him what he thought of the Freddie Gibbs concert. The young man hadn’t been to the concert. He was keenly looking out for members of a rival gang and the policeman responsible for hitting his 16-year-old friend. 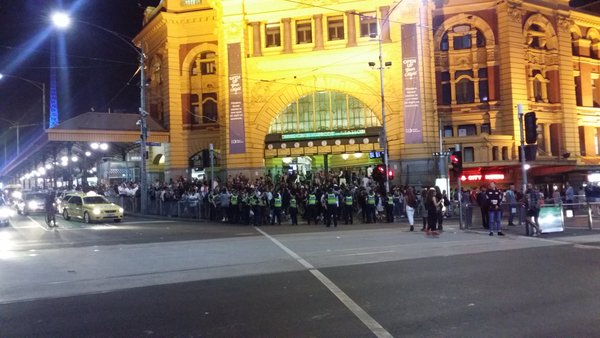 The surrounding events gave a strange context to the concert. Was Melbourne becoming more hip-hop?

When I first arrived at Max Watts at 10pm and saw the venue at half capacity, I was unsurprised. Freddie Gibbs is an underground rapper from Gary, Indiana. He isn’t signed to a record label and has technically only released two studio albums. When Freddie Gibbs finally walked onto the stage, a totally packed and raucous Melbourne crowd greeted him. He didn’t get the reception of an underground rapper, but of an international celebrity. These were the hard-core die-hard fans, who had been responsible for keeping his career underground thriving for 8 years. From where I stood toward the back, a group of four young girls easily recited every lyric to Freddie’s entire catalogue. Oddly enough, they seemed to be more familiar with his older music, than his new, more critically celebrated music. They had been fans since the beginning. A fact that Freddie pointed out when 2012 track BFK received a tremendous response from the crowd.

The benefit of a Freddie Gibbs concert is that it is high-energy hard-core gangster rap from beginning to end. There are no slow songs. Live rap suffers from the problem of being impossibly boring if you don’t know all the lyrics. But the banging bass and spinning trap beats kept the whole crowd constantly on their feet. The crowd absolutely ate up Freddie’s more brutal song selections. There was something comical about seeing 500 white people determinedly return the refrain from Rearview “so many player hating n*ggas, trying to sound like us.” The influence of trap on Freddie’s new music ensured that most songs had a scary power to them. Fans jumped to the surprise Young Thug/Freddie Gibbs collaboration Old English and its frightening trap beat.

One particularly cringeworthy moment occurred when a young and very skinny white guy managed to climb his way onto stage. Security contemplated what to do, and then rather gently pushed him off the edge and back into the crowd. When Freddie had finished the song, he invited the crasher back on stage. It was a tense moment. I couldn’t help but think of the footage of Akon doing the same thing – inviting a fan on stage, only to literally lift him up over his head and throw him off.

On mic, Freddie asked the fan why he had jumped up on stage. “Because you’re a fucking G,” replied the young dude, lamely. It was cringeworthy, but you could tell that Freddie was genuinely touched. Freddie Gibbs is not someone who takes his fame for granted. He appreciates how remarkable it is that a 19 year old from Melbourne, Australia is paying for the music of a 33 year old rapper from Gary, Indiana. “I love you dog,” Freddie replied, before adding, “you almost got fucked up.”

But clearly amongst the crowd were also strewn the keen aficionados of underground rap. The fans of MF Doom or Earl Sweatshirt. Who had likely never heard of Freddie Gibbs before his unlikely partnership with the mad-genius producer Madlib on Pinata. A group of hipster fans passed a vinyl copy of the LP for Freddie to sign on stage. He obliged. He knows full well how this album was responsible for doubling his fan base and affirming his status as a king of the underground. The erratic Madlib sound of Thuggin and Deeper somehow worked over the speaker system. These were the lightest moments of the concert. The sweeter instrumentals contrasting with Freddie’s fearsome lyrics.

On several occasions Freddie asked the audience to put their lighters in the air. A move like this is normally clichéd. Except for the fact that the sheer number of fans (and smokers) meant that the number of lighters completely illuminated the room to stunning effect. An encore of the new Boi-1da produced Fuckin’ Up the Count sent the crowd into overdrive. “MELBOURNE! You the loudest motherfuckers in the whole world!” Freddie told his zealot fans. It’s a platitude trotted out by most performers, but again, I think he really meant it.

The fact that the underground sensation Freddie Gibbs received such an overwhelming response showed that Melbourne is a city with a keen ear for hip-hop. Not only does it have a discerning taste for experimental hip-hop, but also a primal love for gangster rap, with it’s brutal lyrics and thumping bass. With this adoration for undiscovered gangster rappers, and gang violence in the CBD, is it time to move straight outta Melbourne?

Read our interview with Freddie Gibbs