It’s 2016, strange things are happening all the time. But this week, one peculiar event really caught our attention. The Purple One himself, Prince, took to Twitter to tell everyone to STFU about him not wanting his music on YouTube. If you have followed his Almighty over the past few years, you’d realised how rare this is for Prince to not only communicate with fans at all, but to use Twitter – a part of the same social media he has such an aversion to – to do it. What a time to be alive.

Basically, if you go to a Prince concert and you dare to film him and post it online, you can pretty much guarantee it will be taken down in a sort of Liam Neeson in Taken kind of style (we can only assume). Whether it be YouTube, Twitter or even a 15 second clip on Instagram, rest assured it will be taken down. He’s not having any of it. But now it seems he’s also had enough of people asking why. Currently on a random world tour for his “Piano & A Microphone” performances, Prince took to Twitter to quash this dissatisfaction once and for all.

In a series of since deleted tweets, Prince aired his own dissatisfaction with the video service. “Since YouTube doesn’t pay equitable licensing fees, isn’t this a nonsensical question? Peace,” he tweeted. He also replied to a few tweets, and whilst my brain hurts trying to fathom the feeling one must get when you see the notification “Prince replied to your tweet”, he does raise a few good points. Check out some screen grabs of the tweets below. 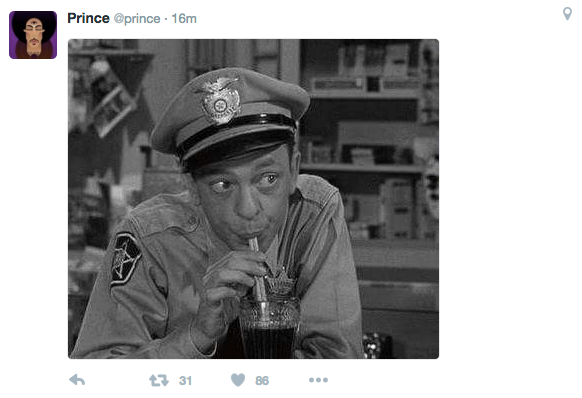