The existence of Kendrick Lamar gives me faith that hip-hop’s gon’ be alright.

Kicking off the night was Sydney’s own Sampa The Great, and writing those words could not bring me more joy. Anyone who has kept track of this website over the past year will undoubtedly aware of my staunch advocacy of Sampa as this country’s best rapper, and to see her open for Kendrick was wonderful. Her razor-sharp flow and intricate production, blending smooth, soulful jazz with heavy beats and bass rhythms, rang through the arena as it began to fill. Backed only by her DJ and producer Godriguez, she owned every square inch of that stage like she was born to do it.

Special guest Remi also joined Sampa on stage toward the end of her set. The pair have just released the smooth collaboration, For Good, and seeing them perform live together once again proved that they are two of the most invigorating and talented hip-hop artists this country has ever had to offer.

For the 45-odd minute break before the main act, a DJ warmed the crowd up with a brilliant mix featuring music of (what I’m fairly certain was) exclusively TDE artists. Already, the crowd was heaving; you could feel the energy and excitement as a dimension of its own.

It’s a big call to make, but Kendrick Lamar is arguably the best rapper alive today. On one hand, he’s a gargantuan commercial success, achieving five Grammy Awards and two albums debuting at no. 1 on the Billboard charts in the last year alone, not to mention a full string of chart-topping hits from previous records. On the other hand, his music is complex and powerful, confronting and political – not just socially aware, but heavily impactful. Revered by his peers and hailed as a true GOAT, Lamar has used his podium to speak both for and to the people (and not just his own culture, either – last night he staunchly announced that he was speaking for everyone, including the predominantly white Australian audience.) All three of his studio albums, Section.80, good kid m.A.A.d city and of course, last year’s To Pimp A Butterfly, have said and done more individually than many rappers say and do throughout their entire careers. Musically, too, his songs are invigorating, brilliant and dense to the point of being difficult to digest at times. Almost singlehandedly reintroducing sprawling, explosive jazz back into hip-hop and the mainstream in general, he has done as much for music and poetry as he has for social commentary, education and political awareness. 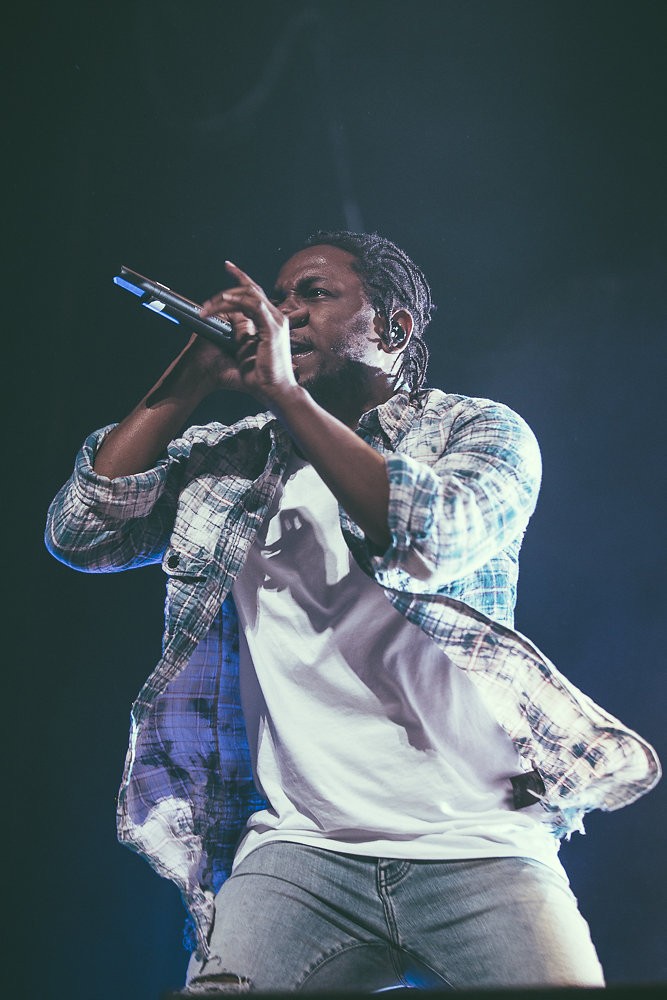 I doubt there’s another artist alive who can have two number one albums, five Grammys, the President of the USA as a mega-fan, his words literally chanted at political protests, and a headline set at an Australian jazz and blues festival – all in one year.

Once his band had set up on stage, Kendrick walked out with minimal fanfare. After commanding lengthy applause from the crowd, he dramatically opened with For Free? more beatnik spoken word than rap song.

From that moment on, the entire audience hung on to his every word and movement. It’s truly incredible to watch 18,000 people jump, and move, rap and sing at one man’s beck and call for close to two hours. Indeed, his twitchy hand movements often took the form of a conductor’s direction, directing an attentive orchestra, hungry and grateful for his instruction.

The set itself was brilliant. Featuring a perfectly crafted setlist blending his three studio albums, Lamar and his phenomenal backing band knew exactly how to bring us up and down – from incredibly hi-energy singles like Bitch Don’t Kill My Vibe, Swimming Pools, King Kunta and an unbelievable, guitar-laden rock heavy version of m.A.A.d city, to the sombre and confronting The Art Of Peer Pressure, the jazzy Complexion and sensual These Walls, it was a perfect set – one that I could have easily watched for three or four hours. 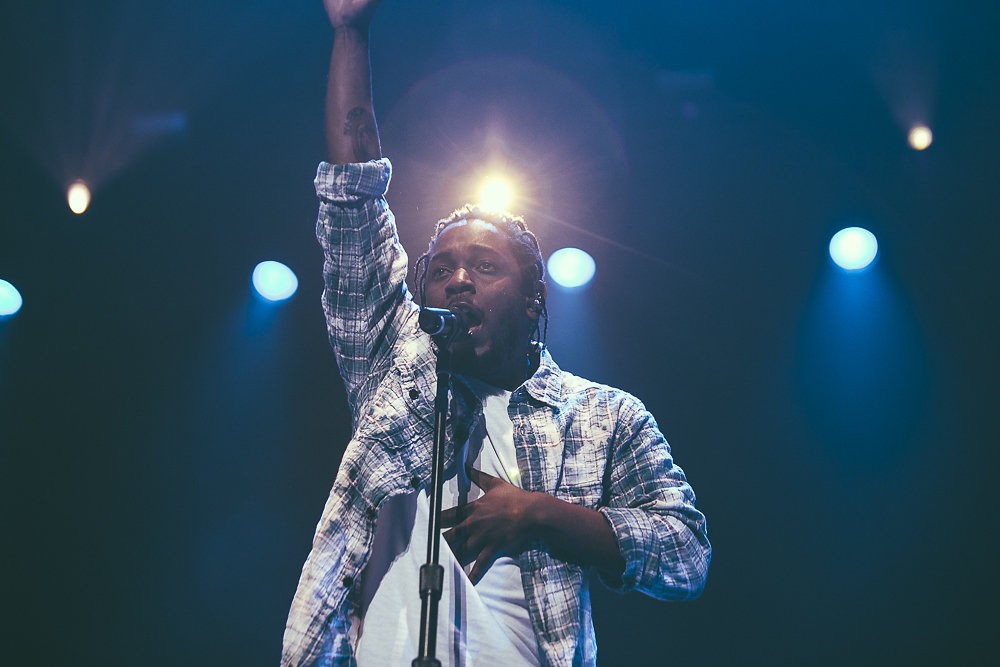 As a performer, there are two sides to Kendrick’s coin. Poised as a gracious, introverted commander-in-chief, he is a hip-hop messiah with a voice and a message. Above us all – not in an even slightly condescending way, more fact than bravado – his presence is humbling, as though sent from above to deliver music and poetry with deliberate, meaningful passion. Yet he is also an incredible entertainer, hip-hop to his very core. Running from side to side of the stage, hyping up deafening cheers, chants, and even a smattering of the classic Sydney vs Melbourne audience rivalry, he repeatedly reassured us that this was the most energetic concert we would ever attend – and you know what? I think he was right.

Lamar’s delivery is astounding. Looking at his facial expressions close up on the screens, it’s as though he has never performed these songs before. Each track felt fresh and alive and new, despite the fact that he’s obviously performed many of them hundreds of times.

A particularly special moment came ahead of his first encore. Kendrick made an impassioned speech about the sudden, tragic passing of A Tribe Called Quest’s Phife Dawg, who died earlier that day at age 45. Commanding the entire crowd to chant, he dedicated Alright to the late legend.

Kendrick Lamar is more than a rapper, he is an artist. The show was not simply a rap concert, it was a performance, incorporating rock, jazz, hip-hop, soul, not to mention jerky dance moves and even a little slapstick comedy. It’s so clear that he’s appreciative of his band and his crowd and his influence on us all, and to watch him on stage, particularly at this prime moment in his career, felt truly humbling. We were in the presence of genuine greatness, and that is a rare and genuinely beautiful experience.

I am still on a high from this incredible show and I will be for some time. Thank you, Kendrick Lamar – your existence makes the world, and hip-hop, a better place.

Read more: Kendrick Lamar Is The Only Rapper Today Whose Success Is Based On His Music Alone