Joey Bada$$ stopped by Sway In The Morning to unleash a vicious 5 Fingers of Death freestyle, and everyone in the genre is loving it. Well, except maybe one person – Troy Ave.

Earlier this year, Ave dropped his controversial track, Bad Ass, which fired shots at Joey, calling him a “filthy backpack rapper” and saying he had a “drug dealer face,” which are childlike insults along the vein of “your face is.” But, where Ave crossed the line was when he took aim at Joey’s deceased Pro.Era collaborator Capital Steez, mocking his suicide and saying he was “burning in hell.”

Joey had remained quiet on the subject until today, when his freestyle addressed all aspects of the beef. He goes the hardest in the second section of the freestyle when defending Steez:

“He took a leap of faith and only brightened his light/You took a cheap shot of hate and only shortened your life/The difference between you and him is that he lives forever/You’ll be the first to die that nobody ever remembers/Because the city never need you ever/You committed career suicide and made New York better.”

Check out the whole freestyle below and listen to Joey spit that fire. It should serve nicely as a warning to anyone including Ave that Joey is the real deal and will not take disrespect lightly.

Clearly Ave didn’t appreciate the greatness that is Joey Bada$$ as he took to his (private) Instagram to hit back at the diss, which you can see a screenshot of below. It’s obvious from the caption Ave isn’t fazed one bit, although we’re not sure if this was a wise move on his part. 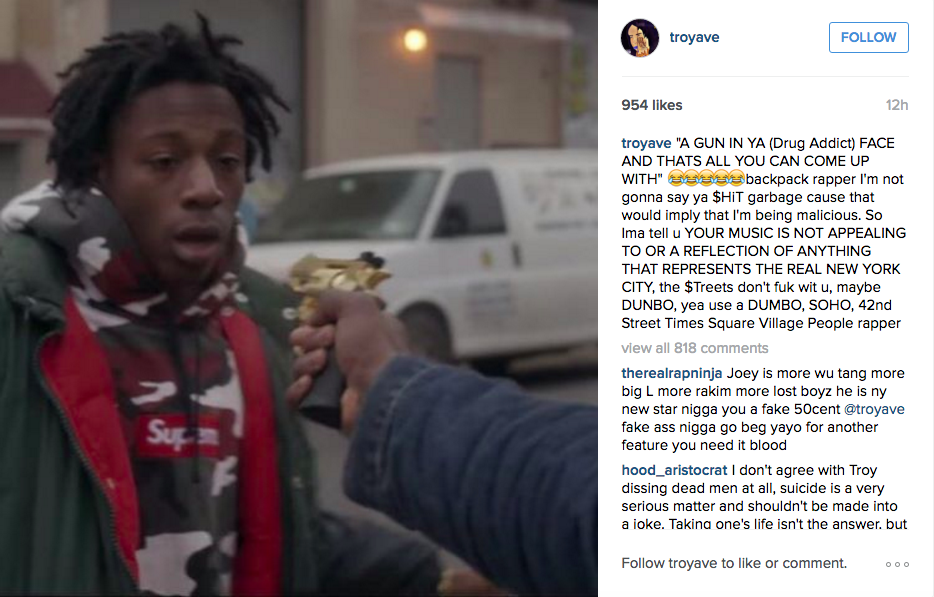 Not only that, he also dropped the visuals for his diss track Bada$$ (Joey Mada$$ ‘Ready Diss’ Reply). It doesn’t really add anything new to the beef, but it does have a suicide prevention PSA at the start of the video. It is hard to take the PSA seriously when you know the contents of the song, so I can only assume it is another shot at Capital Steez. Check the video below.