If you live in Brisbane, you sure as hell know Twin Haus. If you live outside of Brisbane, you may know them. If you’re not in the know at all, you should be. Furiously ambitious, this four piece make meticulous, psych-tinged rock and are one of the most underrated acts in the country. Just days out from releasing their second EP, Nothing Lavish, the band are continuing to go from strength to strength, and slowly but surely are achieving the recognition they deserve.

Ahead of the release, the band have been sharing something special with their fans and fans-to-be. Over the past couple of weeks, they’ve revealed artworks created by artists around the world that have been inspired by the tracks on their EP. First was Tel Aviv-born, London-based artist Yuli Serfaty, then Melbourne artist Adrianna Mammino, followed by fellow Brisbanite Sophie Hopkins. Now, we have the fourth and final instalment of the series, from Serbian artist Marija Kozomora. Inspired by Twin Haus’ song, The Revue, the artwork is absolutely stunning and limited to 10 editions which you can purchase.

It doesn’t stop there though. The band have also teamed up with filmmakers Kids of Bill for short videos to accompany each piece. Featuring a snippet of each song, these videos were also inspired by Twin Haus’ music, and help to set the scene a little whilst gazing at the artworks. You can check out both below, as well as a few quick questions with Marija herself. Preorder the artwork here. 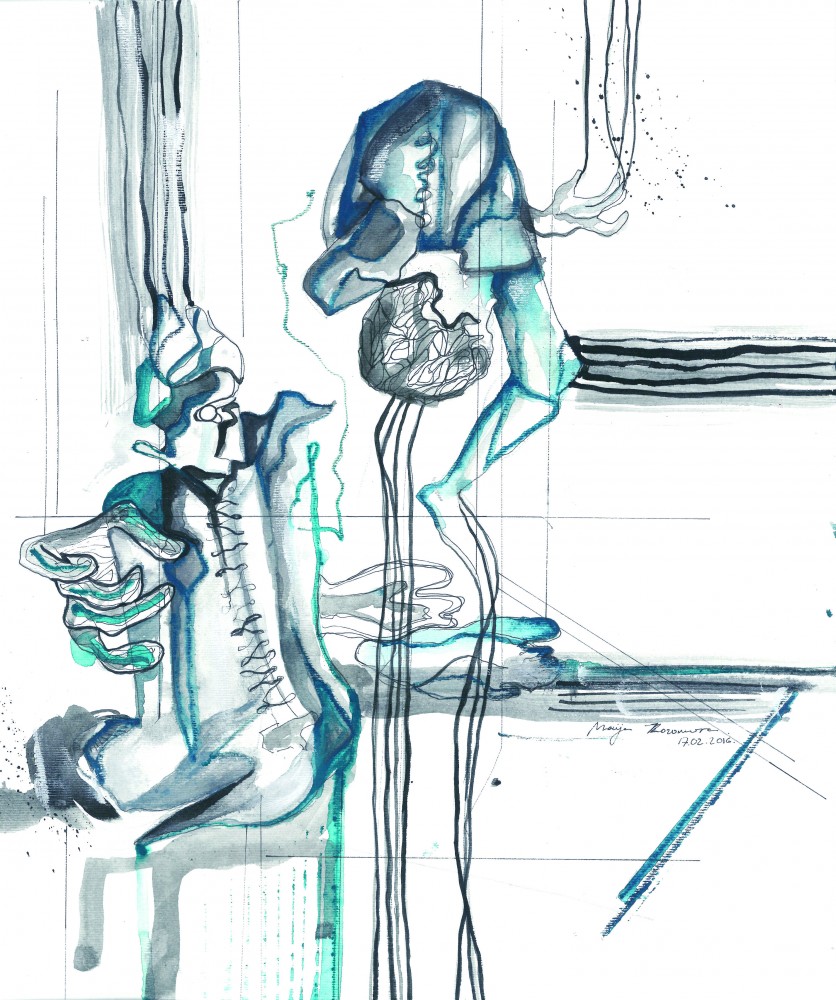 Tell us a bit about yourself?

I’m an artist with strong passion for fashion design, drawing and painting. I’m currently studying textile design at the School of Arts in Novi Sad, Serbia. Before I made that decision, I had been painting for ages. After a couple of years, I realised that I want to make something  different and extraordinary with fashion design, so I redirected my painting skills to fashion design and the result is overwhelming. I want to create solutions for classic and simple pieces using selected colour palettes, mostly with degraded colours. It’s very important for me to develop my own design, even for textile.

What about the song you chose drew you to it? What do you look for when you’re looking for inspiration?

To be honest, I’m really thrilled to be part of this project with these amazing guys! I’ve chosen song named The Revue. I look for my inspiration in my perception of society, my feelings, and the music has influence on me as well. In this case, I was thinking only in along the path that the music took me.

How important is symbolism to you? What stood out as the strongest symbols for you in this track?

Symbolism has huge importance. In this track, The Revue, what stood out as a strongest symbol was the subject of “lost human being.” I was using abstraction and distortion to convey feelings and a particular mood, because often things can be expressed more successfully in forms that are personalised, rather than through the use of realism.

Does this process of being presented with the basis of the artwork differ much from your normal way of creating, if there even is a normal way at all?

No. Because I’m using distortion and abstraction in every form of art. It’s just my formed style which I cherish, and am still working on.

Can you talk us through this artwork? How did it come together and what were you trying to focus on?

Through this project and my artwork I was trying to focus on a human’s downs, you could say, and the prospect of someone’s change of course. I imagined some creature formed, possibly a human, but if so, stricken with abnormality. This “human” isn’t struggling with the environment, but with himself. He is the only threat and danger to his world and environment – I think he realises this and it hurts him. He can acknowledge that he is a problem, and maybe he improves from this.

Do you see mediums like music and visual art as intertwined? Would you ever do something like this again?

Yes definitely! Firstly because this way of thinking and connecting music and visual art is, for me, simply the best way of showing your inside and your feelings. On the other hand each of us has a different perspective, which is what I think is the true value of each of us.