Once upon a time, the only glowing objects held to the sky at a concert were lighters. These days the airspace at any given performance is clogged with glowing the LED of a thousand mobile phones. We’re so desperate to record and inform others of our musical extracurricular activities that we miss the very point of why we’re even at these venues in the first place: the live experience.

Given the ubiquity of mobile devices, apps and social media, we are constantly competing for attention – as are Snapchat, Instagram, Facebook and so on. You’d think that if you fork out $25 – $150 dollars for a ticket, you’d want to enjoy the experience, as opposed to watching it on a screen at home. But for many, we seem to be more focused on capturing the moment instead of living it.

Of course, nobody is wholly innocent. I too, have been a culprit of the film-or-forget mentality. After some concerts, my phone’s memory has been stuffed to the brim of shoddily shot footage that is barely audible due to the thousands of screams overloading the phone’s inadequate recording mechanism.

But how many of us actually go back and watch these grainy videos with poor audio? There’s nothing really interesting about shoddy phone footage, when the click of a button can bring you high-def audio and visual components online.

It’s so frustrating to see audiences watching a stage through a tiny screen. What is the point? As bad as it is for us as fellow audience members, I can hardly imagine how annoying it is for the actual artists who spend their time practising and perfecting their craft specifically for these live performances.

A thread currently circulating on Reddit recently details the account of a concert-goer at an Ellie Goulding concert. Apparently Goulding asked everyone to put away their phones for the final song with the promise that if they did, they might be in for an extra song.

However, the plea fell on deaf ears.

“3 seconds into the song the arena lit up like a night sky with phone torches on recording. After the song she commented again. She’d like no phones and people just ignored her,” wrote Ollie Crook.

Crook bemoaned that although people had recorded the concert for the past three hours, they couldn’t even refrain from not filling the last three minutes. He then reposted an Instagram of Goulding’s that her drummer had taken of the sea of lights.

Although the perpetual phone-fiend is just your run-of-the-mill fare at concerts these days, it’s important to remember that this kind of dissociative behaviour has been going on for a while. The Beatles, at the height of their popularity, could barely hear themselves play for all the screaming going on at their concert.

Seriously, it was that loud that they simply could not compete with the volume of their audiences gleeful screams. Even after they acquired powerful 100-watt amplifiers. If you think it’s implausible that a group of people could scream that loud, you have to remember how incredibly popular the Beatles were. When they visited Adelaide in 1964, approximately 300,000 people lined the streets to see them. The population of Australia at that time was just over 11 million.

Eventually, the Beatles grew tired of having to compete with the ecstatic screams of their fans and they stopped touring, concluding that their performances were no longer about the music. Fans were so busy screaming that they forgot what they were even screaming about.

And that brings me to my point. Have we become so obsessed with narrowcasting our entire music spectatorship that we’ve forgotten what the magic of live music is all about? Seriously, a Snapchat disappears after 24 hours. But if you properly engage with what’s happening in front of you, that memory lasts a lifetime.

Think about the instances where you can’t actually access your phone, like at a music festival. Now I turn my phone off as soon as I enter the festival site because let’s face it, it’s going to die anyway, and there’s hardly ever decent reception. After a few hours, I already start to feel… lighter. As if this cellular anchor has been cut loose from me and I can actually just live in the moment. Does the fact that I can’t document the event with my own audiovisual output mean I wasn’t there, or I had a worse time, or that I wasn’t as invested or passionate about the artist? No. Not even close.

As well as limiting your own live music experience, it’s disrespectful to the artists and everyone around you. How many times has an errant arm desperately trying to capture a phone video 9that is realistically just bobbing heads with some noise in the background) smacked in you in the side of the head when you were simply just trying to watch the show?

Some musicians have gotten so fed up with the practice that it has prompted them to pre-emptively request that fans refrain from doing so. Case in point was the Yeah Yeah Yeahs, who had a very specific request for their audience: 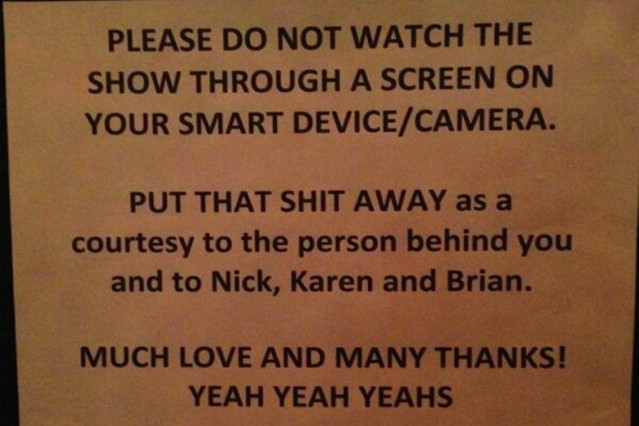 Maybe it’s time to heed their advice. Instead of spending the entire concert wasting your perfect view of the stage desperately trying to record your favourite song, put your phone down. Seriously, just put it away. Someone else, with better technical expertise has undoubtedly got you covered already. You are wasting your time and your money and your life experiences.

So for next time: please put your fucking phones away.