The police department of Charlton, Massachusetts continues its search for Charlton’s hottest MC.

On Saturday afternoon, MC Open-Toe Sandal and the Dresser Hill Gang, were spotted roaming the streets, pulling people over and challenging Charlton’s youth to a freestyle battle. At this moment, Open-Toe remains undefeated as many people were too afraid by the Dresser Hill Gang’s killer bars to spit back.

The Charlton Police Department wish to speak to anyone who has any information regarding the Dresser Hill Gang’s whereabouts, as he is under arrest for being Charlton’s Illest. This is an actual post, and consequent clarification, from their Facebook over the weekend. What a time to be alive. 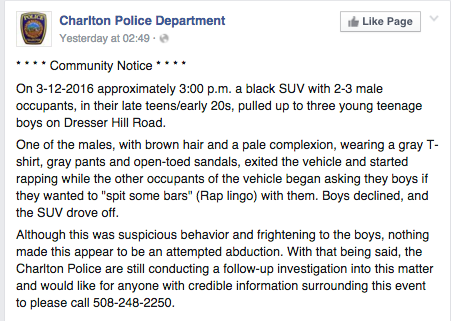 But in all seriousness the search for Charlton’s finest doesn’t really seem like a police matter. Maybe there is room there for a new reality TV show, Rolling Street Battles, but surely this is a waste of police resources. There are a lot of ‘soccer moms’ in the Charlton area who have real concerns when it comes to their kids knowing “rap lingo.” They fear it will lead to a the usual attitude that rappers have, “fuck bitches, get money.”

They have a point, we don’t want another generation of kids to grow up disrespecting women, because they think it’s cool, or whatever the actual reason is. A lot of comments on the Charlton’s PD Facebook reflect this attitude. The police should be devoting time and wall space to gathering information on men who harass women. 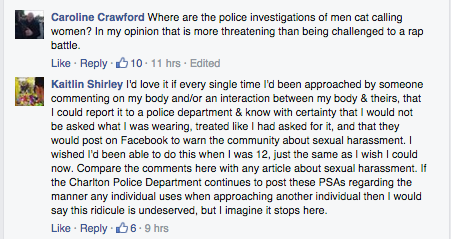 As an adolescent you are bound to lose a rap battle or two before knowing whether you have what it takes to be the Guru, or a social worker. I wish MC Open-Toe Sandal great success in putting Charlton on the map (unless he actually is a child abductor or something equally as horrifying.)