What looks like a massive accident on someone’s part (and that someone is probably now unemployed), a new album from Kendrick Lamar has just popped up on Spotify. Titled untitled unmastered, the album is there (or at least was if it’s not taken down by now) and has even been officially tagged by his label, Top Dawg Entertainment. If you don’t believe me, check the screenshot below. 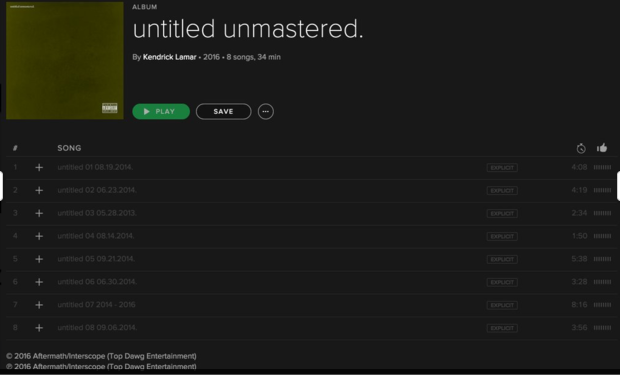 It was earlier this week that the TDE crew shared a photo that hinted at new Kendrick Lamar material, but I don’t think anyone thought it was going to be this soon!

There is a lot of theorising happening right now as to what is actually happening, but given that Lamar himself said he has a “chamber of unreleased music“, and that the internet exploded with desire to hear said music, perhaps this is K Dot listening to his fans?

The Spotify stream is currently not playable, but it is there and now everyone knows it. Whether they like it or not, it looks like Kendrick’s people will now have no choice but to give the people what they wanted – fresh music from King Kendrick Lamar.