Timbaland allegedly refused to perform at a Michigan charity benefit after he couldn’t get his hands on his champagne of choice. Due to perform at the Thursday night fundraiser for Flint Water Crisis Charity Show, the rapper became highly discontented after being offered Dom Perignon instead of his poison of choice, Jay Z’s Armand de Brignac, a.k.a ‘Ace of Spades’.

The owner and the promoter of Club Bleu Mitchell Jaworski has claimed that after this discovery Timbaland said “he did not feel like performing” his allocated 30-minute DJ set and instead “stood behind the decks and nodded his head” as another artist played.

However, apparently the mix-up in champagne didn’t matter to Timbaland and his crew, who then proceeded to drink everything in the VIP seating area, including two bottles of Patron, three bottles of Ciroc, two bottles of D’usse, and one bottle of Disaronno Originale Italian Liqueur.

“They had about 15 bottles of liquor and champagne which is extremely excessive for a charity event,” Jaworski told the Daily News, “They seemed more concerned about getting every drop of liquor.”

“They then insisted that we show them the signed contract for the night and where the stipulation was for the ‘live’ performance.”

“Finally management relented and literally had to wake Timbaland up so he could proceed to stand behind the decks and nod his head for 30 minutes.”

“It was a disaster,” added Jaworski’s wife, Aureila Jaworski.

Timbaland and his management allegedly tried to dispute a contract signed two weeks ago requiring a live set from the music producer, performing five to eight songs before a crowd of 300. Timbaland then refused to speak to club employees while posing for photos and was gone by 2am.

The charity show was intended to support the people of Flint, which has had its water supply rendered undrinkable after switching its water supply to the Flint River, resulting in millions of homes being infected with poisonous lead.

The event generated up to $3000 to buy bottles of water and filters for the affected residents of Flint. Singer Cher herself has personally sent 180,000 bottles to the city to help alleviate the problem, whilst Pearl Jam, Pusha T, 50 Cent and many more have also donated literally hundreds of thousands of bottles over the past few weeks..

A statement provided by Timbaland’s representatives denied the accusations that the producer refused to play.

“Unfortunately, the statement made by the promoter in Detroit is simply not true,” Timbaland’s rep says in a statement provided to Billboard.  Timbaland is an “extremely generous person who agreed to a much lower fee for this event to raise money for the Flint, Michigan’s water crisis,” the statement continues.

“The promoter was fully aware that this was not a full band performance on stage, yet still promoted it as such. The club was still able to raise money for charity, which was our goal in doing this event all along.”

Timbaland – real name Tim Mosley – reportedly repeated his antics at a regular concert at CAVO in Pittsburgh the following Wednesday.

A representative of CAVO said that the producer “embarrassed himself” by refusing to perform even after being served two bottles of “Ace of Spades”.

However, Timbaland took to Instagram to defend himself, responding to a fans comment by saying, “I want everybody to think I wasn’t suppose to perform think about it.” 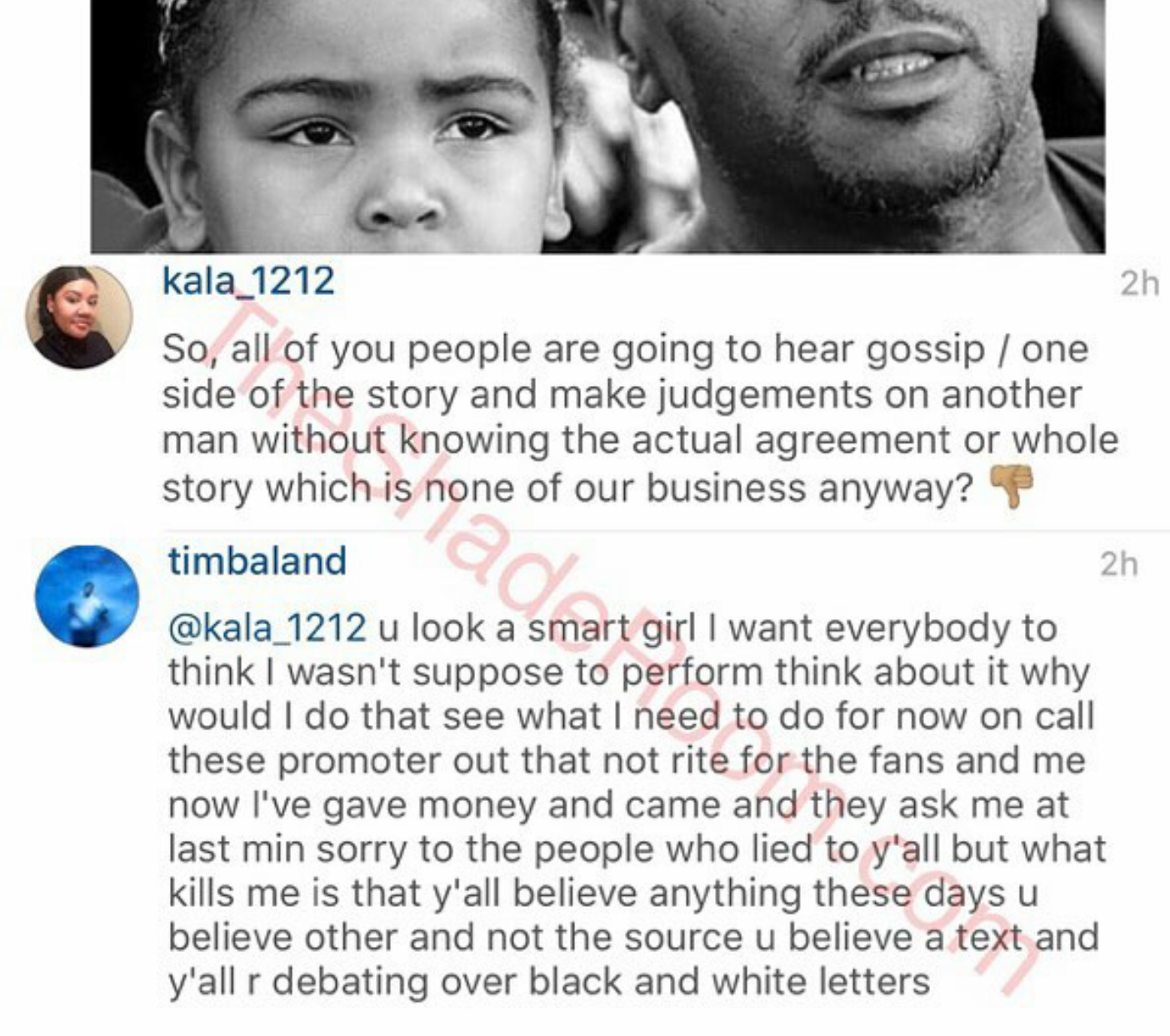 “Why would I do that see what I need to do for now on call these promoter out that not rite for the fans and me now I’ve gave money and came and they ask me at las min sorry to the people who lied.”

He continued in another comment: “I’m the realest and I don’t let people down I’m here to uplift not disappoint so I’m sorry for the confusion.”