Super Bowl 50. What a time to be alive. For those of us who might not be watching for the football here is a list of the best moments that have nothing to do with the sport.

Before Coldplay and the gang took the stage at half time, Lady Gaga opened the Super Bowl with the Star Spangled Banner. Between her Oscars performance last year and this, Gaga seems to be on a mission to prove to everyone she actually has some pretty nice pipes and is a #serious singer, and she’s doing a really great job at it. However, she also did do a pretty threatening hand gesture at the end… Was she just threatening me? Fine, you’re the best Lady Gaga.

The half time show was advertised as Coldplay performing with special guests, and began in true Coldplay style; Chris Martin singing the opening of Yellow whilst the crowd runs around him. He’s a man of the people! The first half of the performance was a medley of Coldplay classics – Viva La Vida, Paradise, and the screams of fans as they desperately try to keep their grip on front man Martin. Why they were putting so much energy when we all knew Beyoncé was coming out soon is beyond me though.

There was a lot of hype around Beyoncé and Bruno Mars being guest performers this year. Mark Ronson on the decks and friends assisted Bruno in an all leather rendition of Uptown Funk. Beyoncé appeared as only Beyoncé could – amongst a army of dancers and flames. Then something crazy happened Beyoncé almost fell over though, you probably didn’t notice because she recovered like the queen she is.

By the end, you’d be forgiven for totally forgetting that this was actually Coldplay’s show, until Chris Martin wedged himself between what could have been a dance off between the two actual stars. Sorry if you’re a Coldplay fan, but it seems that no one passed that memo onto Bey and Mars. The Coldplay lyric “I used to rule the world” has never sounded more fitting. The jury has made a decision Chris you are this year’s left shark. 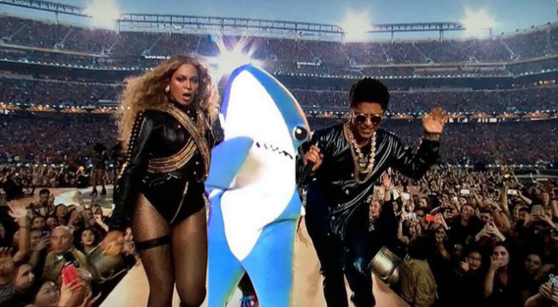 Whilst it’s not actually apart of the half time show, the real MVP from this year’s Super Bowl has to be Empire actress Taraji Henson’s tweet where she may or may not have thought she was watching Maroon 5. Big ups to Coldplay for managing to get someone to like Maroon 5. Taraji deleted her tweet but it will always live on through the magic of screenshots.

If you still haven’t seen it yet, you can catch the full performance below.