The Nanny State. It’s real and it will come and find you. And fine you. As was the case for this New York expat in Sydney, who, as he put it, ended up paying $284 for a beer. Well, kinda.

Josh Gaudry and wife Anoushka Szlagowska were back in Sydney after a two-year sojourn to introduce their baby to friends, and upon their return were bamboozled by the absurd amount of nanny state rules that had cropped up in their absence.

Speaking to the Sydney Morning Herald, Gaudry relayed how he was just catching up with a few old friends for a casual drink and was left dumbstruck by the complicated and nonsensical amount of road tolls, parking fees and street signage, prompting him to profess that “Sydney has lost the plot”.

In one night, Gaudry managed to rack up a $248 fine and had a brush with one of “Sydney’s most confusing parking signs”.

Gaudry detailed how he managed to accrue such a plethora of expensive tolls during the 40-minute drive from Kellyville, including the M7, M2, Lane Cove Tunnel and Harbour Bridge. “Each ‘bleep’ on the roam tag was like a tiny kidney punch to my wallet,” explained Gaudry. However, it was only going to get worse. 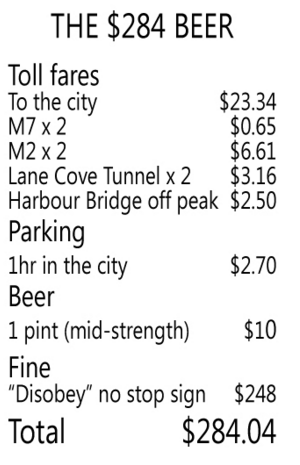 “Upon arriving in Pyrmont, I aimlessly circled the streets for 30 minutes trying to find a parking space. It felt like I was in a Hunger Games race for car space sanctuary.”

“Eventually, I found a spot. Or was it? Rubbing my eyes to ensure it wasn’t a mirage, I was confronted by four ambiguous, conflicting parking signs all piled on top of each other to create one monstrous ‘super sign’.” 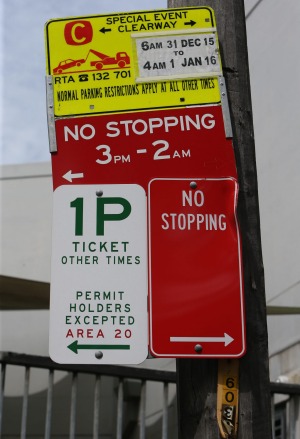 The sign is a confusing amalgamation of four others that has confused many would-be parkers. As any Sydneysider would know, parking where you shouldn’t can result in some heavy state-sanctioned penalties courtesy of your wallet.

“While sipping on my overpriced pint, old friendships were resumed with some deep debate about the order in which one should watch the Star Wars movies if you hadn’t seen any before.”

“I left the conversation to go and pay for more parking. I found an infringement ticket flapping under the windscreen wiper like a fish taking its final breaths. $248 for “disobeying a no stopping sign”. $248!!”

“Yet the final crushing blow came with a definitive ‘computer says no’ response to my formal appeal to the Office of State Revenue. I based my case for leniency on the grounds of a) confusing, ambiguous signage b) the punishment not fitting the crime and c) it’s Christmas for F’s sake!” Said Gaudry.

“My carefully crafted case for consideration fell on the ears and eyes of the bureaucratic numbness of a government department that doesn’t appear trained to exercise ‘judgment’.”

However, the City of Sydney was a little more sympathetic in their response.

“The City has long been lobbying the state government to introduce kerbside line markings – as used in many cities around the world – to reduce the confusion that multiple signs create,” said a spokeswoman for city council

Gaudry has returned to New York, but not before he threw some serious shade at the city he once called home before he left.

“Screw you Sydney and your overbearing nanny state. I would rather be back in the most heavily policed city in the world of New York. No meat-head bouncers telling me I can’t get in because they don’t like my shoes, no lock out zones at midnight, no food venue shutdowns because of some daft law to avoid loitering, no aimless circling for a carpark oasis that doesn’t exist, no excessive tolls to drive under a bloody tunnel.

“And certainly no mid-strength beer for $10,” he adds finally.

You go Josh Gaudry! Speaking the minds of every Sydneysider out there. Anyone below the age of 35 would know that one of the biggest travesties of the Nanny State to be seen in recent years would have to be none other than the lockout laws, which have since asphyxiated the Sydney nightlife scene and pushed punters into illegal warehouse parties in inner-city suburbs like Alexandria and Marrickville.

Brisbane too is under threat from having its own lockouts laws enacted. But you can help. Don’t let Brisbane suffer the same fate as Sydney. Sign this petition at change.org to protest Labor’s lockout laws and send a direct message to the State Government.

We know lockouts don’t really work. They don’t work in Sydney, and they won’t work in Brisbane. Come on Brisbane, don’t be like Sydney.