A man whose influence spanned decades and defied genres, David Bowie has long been cited as one of the biggest influences of pop sensation Lady Gaga. Having never made a secret of her admiration of Bowie, it seemed fitting that Gaga be the person for perform a tribute medley of his hits at yesterday’s 58th Grammy Awards. 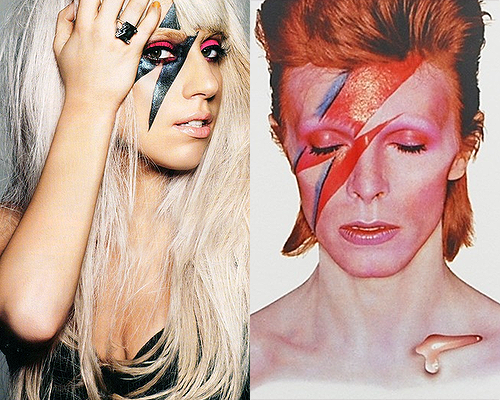 Gaga was joined by Bowie collaborator Nile Rodgers for the tribute of nine Bowie songs, including Rebel Rebel, Suffragette City, Lets Dance, Fame and Heroes. The performance earned a standing ovation from the Grammy audience and has since received praise from a number of celebrities, including Bette Midler, declaring that it was a wonderful tribute to the musician who inspired so many.

Now, the late musician’s son and BAFTA Award winning director, Duncan Jones has commented on the commentary via Twitter. Jones clearly wasn’t as appreciative, suggesting that the end result was a strange, melodramatic display of infatuation than an entertaining performance – via what we can only assume is the the dictionary definition of the word “gaga.”

“overexcited or irrational, typically as a result of infatuation or excessive enthusiasm; mentally confused.” Damn it! What IS that word!?

We kind of get where Jones is coming from; Lady Gaga clearly has a lot of love for David Bowie (hell, she got a tattoo of his face on her torso a few days ago), but the show wasn’t exactly outstanding and it did seem like it was just a massive ad for Intel, who Gaga has a partnership deal with, with a Bowie medley stuffed in the middle. That being said, it wasn’t as though Mother Monster and co. totally butchered the songs.