It’s been three years in the making, but last week Rihanna‘s fans’ (aka her Navy) patience was rewarded, with a bungled “leak” of her latest album, ANTI. Fans awoke to the news that a new single was out, but just hours after Work featuring Drake was becoming the most streamed song of the day, someone who has now probably lost their job, fucked it up for everyone and leaked the entire album on Tidal. And, because of the way the internet works, it soon found it’s way around the entire world before Ri Ri herself gave it to her fans as a “free download”.

However, fans may have been hit for a six with this record. If anyone was expecting another Rated R or Unapologetic, they had another thing coming. But then again, they shouldn’t have been expecting that, and they definitely shouldn’t have been surprised when they heard it for the first (or in my case, 30th) time. No, Rihanna had been hinting at a change in direction for months, if not years. Whether we realised it or not, Rihanna hadn’t just been taking an extended holiday since 2012’s Unapologetic; she had been finding herself and coming into her own.

Just like Justin Bieber before her, ANTI represents the deconstruction of the manufactured pop star and the reassembling of Rihanna as a living, breathing personality that vibes with bands like Tame Impala, and alternative hip-hop stars like SZA and deals with self deprecating thoughts and is terrified of love. She’s human now. She’s not the hit machine she was in the Umbrella era. “Rihanna the pop star” is now “Rihanna the person”.

Starting off with a that is a sample of Common‘s Be (Intro), her Barbadian accent is thick from the get go in the album’s first song, Consideration. Teaming up with SZA, an up-and-comer herself signed to TDE (the same label as Kendrick Lamar and ScHoolboy Q), the pair sing of Rihanna’s need to “do things my own way darling,” in regards to her creative output. She begs for her “reflection” to be given a “break from the pain it’s feeling now” and asks if the faceless people above her will ever respect her, but it’s delivered in the swaggering, no-fucks-given, I-don’t-care-what-you-think-anymore attitude that Rihanna has developed over the past three years. She’s gotten herself to a point where the industry now has to bow to her whim, not the other way around. And she’s got some changes to make. 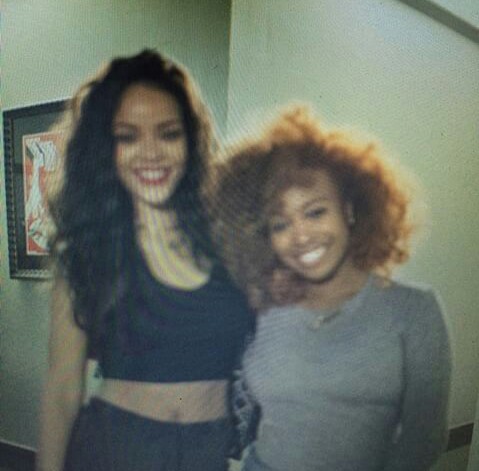 From here, we delve further into her introspection. James Joint, now confirmed to be named after one of her regular collaborators James Fauntleroy, toys with her confusion when it comes to love – “Don’t know why/ Just know I want you“, a theme she revisits again in the next song Kiss It Better as she grapples with the grief and second thoughts that come with a break up. “Fuck your pride / Just take it on back boy, take it on back / Take it back all night” He’s done her wrong, but she wants him back anyway – something a lot more personal and intimate than the likes of SOS or Pon De Replay.

The intimacy and vulnerability continues to be showcased, from the dancehall track Work – featuring Drake where the two kind of want the same thing but they’re kind of missing it at the same time (Rihanna wanting more, Drake just wanting sex) – to Desperado, an ode to knowing you need to leave but the fear of being alone if you do. It’s one of the best songs of the record, and is one of the most dramatic. Her take on love is almost Lana Del Rey-esque for the first half of the album; reckless and dangerous, toying with the idea of rebellion but fixed with an uncertainty that prevents her from making a decision, so she relies on impulsive behaviour (so long as someone is with her for the ride). Woo, the trap styled track produced by Hit-Boy and rumoured lover Travi$ Scott, further cements this, as she goes from lusting after her ex to trying to convince herself she “don’t even really love you/ I don’t even really care about you no more.” We have never had as much personal insight into Rihanna’s internal struggles as this, nor have we had such an extensive sonic palette on which to examine them before.

Needed Me is where things start looking up a little bit, and is the track that had the internet metaphorically screaming “YAS KWEEN” as she shrugs off the men who have misinterpreted her casual flings for more, and who in fact needed her whether they care to admit it or not. She’s Rihanna, she doesn’t need anyone and she lays it down here for everyone to know. It’s the female empowerment anthem that we need, where she doesn’t give a fuck that she may be hurting someone and makes it okay to be a “bad bitch” or even a “savage” – she “never told you you could have it.” The sass doesn’t finish there either as she goes on to tease her new lover in Yeah I Said It, employing some intentional pauses and wordplay to string them along – just a little bit. This is the album’s sexiest track, yet also one of it’s simplest.

So there, the first half of the record and we have a confused, restless, sometimes irrational Rihanna who is kind of fed up with love but at the same time not really. It’s here that the album deviates quickly. From the uneasy, uncertain and unpredictable first half, something has changed and she’s now acknowledged that she still is in love with her past lover. It’s terrifying and she’s tried to move on, but now she feels “like a brand new person” with her cover of Tame Impala’s New Person, Same Old Mistakes, but still making the same mistakes. Renaming it to Same Ol’ Mistakes, this track serves as the middle ground between the album’s two halves – one where she convinces herself to be alone, and one where she knows it’s not over, at least for her. Her past, which she knows and can deal with, and the future which is uncertain, different and scary.

From here, Rihanna let’s herself feel it all. In the albums before this, she has progressively created a fiercely independent image of someone who is completely in control and capable of doing everything herself. But now, something’s changed. Never Ending is her recognising a shift, as her “soul and body try to mend” before asking “Why does it have to feel so strange to be in love again?”

It’s important to keep in mind how widely publicised her tumultuous relationship/break up/getting back together with Chris Brown was, and the fact that she is indeed a survivor of domestic violence. That is something that would fuck anyone up, let alone an international pop star with the world watching her every move. She has often spoken of how she still wishes for Brown’s happiness, and how much the pair were in love with each other. The parallels between their relationship and the final few songs are obvious, as the pain of still being in love with him becomes almost too much to handle.

To end the record, we get her three best songs yet. Love On The Brain is an explosive, liberating track that uses a 1950’s doo wop arrangement to accompany her extraordinary singing, on par with Alabama Shakes‘ Brittany Howard. She references her aforementioned past, and acknowledges how she is torn between the fleeting, passionate encounters and the heart-wrenching despair it brings her. She diagnoses herself with “love on the brain” as the reason for her behaviour, as it beats her “black and blue but it fucks me so good/ And I can’t get enough.” She tries and tries and he still won’t let her in, and still tears her apart. The hurt in her voice is palpable, and continues in the raw, stark, Bibi Bourelly written Higher – a song where she fully realises the effect this person still has on her, and the intimate Close To You where she just wants to be with this person so desperately. She admits “I’m in love/ You can’t blame me for checking” even though the song opens with her singing about having just “tears” for breakfast whilst he doesn’t really care. She knows full well how bad this is for her, but she just can’t help herself.

ANTI as a whole is a huge artistic statement. It’s anti-everything and is the point where Rihanna is now demanding to be taken seriously as an artist, not an industry-crafted personality. It’s also her most brave and bold move yet, not only with the lyrical themes but with the producers and songwriters she has been working with. Moving away from the EDM-influenced pop that is responsible for her biggest songs, she no longer seems to care about hits and instead opts for songs that will move your soul and your mind instead of your body. It’s intentionally all over the place, sounding almost like a mixtape in the way it features so many different styles and sounds, and serves as a taste of what we can hopefully expect still to come from her.

This is Rihanna’s most intimate, vulnerable, personal and experimental album yet – and it’s also her best. She’s ready for a change, she’s found herself and she’s opening up. She knows people aren’t going to be over the moon about her singing of her love for Chris Brown, but she doesn’t care anymore. She’s real, she’s a person and she’s got feelings we all have – it’s just that now, she’s letting us in and she’s made it sound so damn good.