Centring on the philosophy of Dr. King , and the state of US society, naturally the discussion continually related back to Sander’s own campaigns and beliefs. Debating racism and inequality, and relating these issues back to the political model that does not serve a whole community, the panel also touched on crime, policing, the prison systems and even healthcare. Challenging the US government to deliver reforms that do not simply benefit Wall Street, Nina West proffered the African proverb of “I am because we are,” illustrating the power, and importance, of a community voice. 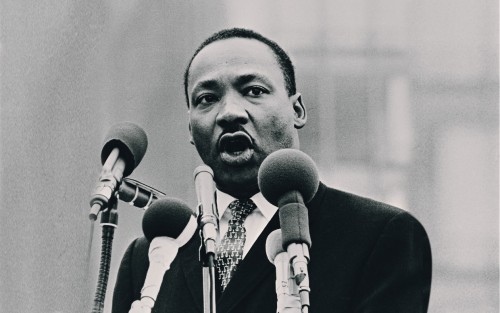 Introducing himself under his real name of Michael Render, Killer Mike explained that his rap name “is what my dumb friends called me in a rap battle once, and it stuck.” He listed the men and women who have mentored him, sketched his own experiences concerning the issues at hand, and discussed the teachings of Martin Luther King.

“I know that they killed a man named Martin Luther King, but they did not kill a philosophy,” he said, raising his own experience of growing up with his father as a member of the police force, and his family’s life during Ronald Reagan’s presidency.

Killer Mike’s career has been continually influenced by his own political concerns and beliefs. Touching on issues of race and inequality in his music, Killer Mike is also known as a vocal social activist. Recognising his responsibility to speak out for African Americans, he has commented on controversial and unlawful killings, particularly the incident of Michael Brown’s death in 2014. He has also penned a number of articulate and thought provoking op-ed’s for various publications, including a piece for Okayplayer talking about the message of Martin Luther King.

While the endorsement of Sanders is a little hyperbolic, it nevertheless highlights the topics at hand. There’s no getting away from the political bent behind the exercise, but the translation of Dr. King’s legacy is an interesting one. As America stares down an uncertain 2016, and many are bracing themselves against the disturbing sense of backsliding, Martin Luther King’s philosophy and teachings are perhaps more needful than ever.

Watch the video of the panel discussion below.