Young Thug is many things. Autotune crooner, cross-dresser and purveyor of a new brand of edgy hipster Southern hip-hop. He is also a pissed off father. In his latest Twitter rant, Young Thug goes off on the baby’s mamas keeping his kids out of reach. “When you bombs give me custody then I’ll be able to see them every day but until then I’ll just pay my child support that I put myself on” tweeted Thugga.

But Young Thug wasn’t done. He called into question the justice of keeping children in a financially unstable environment: “I just wanna no y should a peasant with no job, or future, or apartment/house/condo have custody of a rich mans child!!!” Why indeed. Finally, Thugga sunk the solid gold teeth in with this roast:

At only 24 years of age Young Thug has already spawned an impressive litter. Experts estimate that Thug’s brood now numbers above 11. In interviews Thug has revealed that his oldest child is seven, there’s also a four year old, and at least two three year olds. Oh so he’s got twins? That’s so sweet! Guess again. It’s the R-rated Cheaper By The Dozen sequel that needs to happen.

This isn’t the first time Young Thug’s parenting or his army of miniature clones has lit up social media. Thug’s young daughter earned Instagram infamy when a video emerged of the surly 3 year old repeatedly declaring “I’m muh’fucking tired.” The video quickly went viral. Partly because it’s a benchmark in lax parenting, and partly because it so accurately expressed the mood of so many Internet users – muh’fucking tired. The little girl is kitted out with a solid gold grill, despite not having any teeth.

After copping some flack over Instagram, the Baby Mama released this lucid statement. 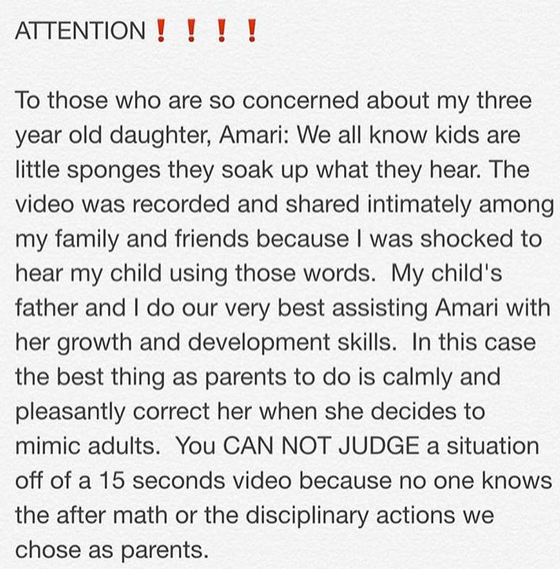 This would be slightly more believable if you couldn’t literally hear her coaxing her daughter to repeat the meme-worthy soundbyte over and over again.

Some people might say that a man with a song titled Extacy Pill, taken off a mixtape simply titled Lean, is not fit to be a father. But by all accounts Young Thug is a real family man. Young Thug’s mom had 11 kids, and Young Thug appreciates the struggles and fun that comes with having a big family. His entourage his made up of siblings and cousins. His sister Amina is his day-to-day manager. His mother’s favourite Young Thug song is OD, because he lists the names of all his brothers and sisters, including brother Bennie who died when he was 9. Young Thug’s mother is provided with only the best, and wears her gold grill and diamond ‘RICH GANG’ necklace with pride. There’s no doubt that Thugga can provide for his kids. As he says: “oh and I forgot, I got a mansion with 12 empty bedrooms waiting for them.”