The OGs of the rap game are rapidly approaching middle-age, whether they, or we, like it or not. Some of them are still releasing dope albums – Scarface dropped Deeply Rooted shortly before his 45th birthday – and then there are some who are still wearing clocks around their necks. Whatever these second or third decade rappers are wearing or doing, are they still worth the money to see live?

With the recent surprise of a mysterious Wu-Tang Clan poster popping up in Melbourne this week, and subsequent rumours of an Australian tour on the cards, we had to ask ourselves; when does it become time to hang up the gold ropes, the puffy jackets, and the AKs, and stop touring? 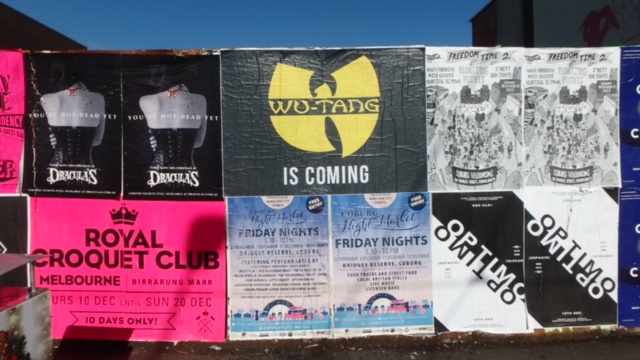 I find myself having mixed feelings about this tour. One part of me wants to link my thumbs, throw the dub up, and shout, “Wu-tang Clan ain’t nothin’ to fuck wit!” The other part of me thinks I may have plans to wash my ‘fro that weekend.

But at the same time, I haven’t seen the whole Clan together or even all of the members individually, and that’s got to be something worth seeing. My hesitation comes from having seen a few OGs perform in the past few years, often with minimal effort put into the shows.

I think we are only just seeing the beginning of the OG midlife crisis tours as the end of the ’90s was 20 years ago, and what better excuse to tour than a 20th anniversary? Earlier this year, I saw Mobb Deep celebrating the 20th anniversary of their album, The Infamous. I loved The Infamous- Survival of the Fittest was my jam, and I finally got to hear that legendary beat and Havoc and Prodigy yelling, “There ain’t no such thing as half way crooks.” But that was exactly what it was, with Havoc and Prodigy yelling into their mics too close to their mouths. While I would never down play the experience of hearing that song live, I have gotten way more out of that song with a CD player, a joint, and some good mates.

It was the same when I saw The Outlaws and Snoop Dogg, and was how a friend described Public Enemy, each and everyone described as “underwhelming” at best. But in saying that, it was admittedly not the same for The Bone Thugs-N-Harmony – they really did kill it.

Maybe it really is to do with their energy – 20 years on, and there is no denying most just don’t have the same energy that Childish Gambino can muster at a festival. I don’t think it is just hip-hop that suffers from old vets still touring. Take Bob Dylan, who can be utterly awful live these days, but I still paid whatever it was just to be able to look back at my life and say, of course I saw Dylan live.

It’s not necessarily the age of the performer that is important, and it isn’t the fact of their being in their 40s that is the negative. Run The Jewels‘ artists Killer Mike and El-P were both born in 1975, making them 40 this year, and they are producing some sick beats and have been dubbed one of the best live acts going around at the moment, with a relentless tour schedule to boot!

So what is it about the seasoned vets of hip-hop that has me questioning their touring relevance today? Is it their dad bodies or their lyrical content? It can definitely come down to the fact that their raps haven’t changed in 20 years. It becomes har,d and a tad try-hard, to listen to a middle-aged rapper rap about his struggles, murdering fools and selling dope, when I have seen the MTV cribs episode where his enormous house featured. As opposed to Joey Bada$$ and the other young rappers whose struggles still ring true, the tales from the Hood just don’t cut it as well anymore. But that’s what they know, that’s the raps that had them stacking paper in the ’90s and helped them to move out of the ghetto in the first place, so it’s a catch 22 of epic proportions – can you deal with this multi-millionaire rapping about killing fools and dealing crack, trying to make ends meet and fucking lots of bitches at the same time? It lacks that certain authenticity that made them so successful in the first place.

Newer rappers, from the newer guard, like RTJ, Talib Kweli and Common haven’t solely relied on biographical rhymes to build their careers. Their music seems to age better, and Talib could easily drop Thieves in the Night, and play it off as a new track. It doesn’t have any aged raps of murdering or dope dealing.

Now call me Nas, for my self-proclaimed hypocrisy, but if this Wu-Tang poster turns out to be an Australia tour, you will find me in the front row, nodding my head and blocking your view, ’cause fuck it, I’m the kind of hip-hop head that has written essays for English class about the first concerts I’d go see if I had a time machine – the first is Run DMC and it pained me to hear of Jam Master Jay’s passing and to think I’d missed them. I would have given anything to see him or a 45-year-old Tupac giving Melbourne a middle finger in 2015.

It’s impossible to tell some of hip-hop’s legends that maybe they should move into commentating and just let the new kids play. Besides, the example set by other genres suggests that 40 is still young, and as long as the fans say ‘go’, maybe the Keith Richards and Bob Dylans of the rap world will still be touring long after their bodies say ‘stop’.

Are we saying they should be releasing new albums to reflect their successful lifestyles? Not exactly, although we won’t say no to a new Wu-Tang album. But, we are saying, if they can’t be bothered and they know they’re going to do the show half-assed, isn’t it better to preserve fans’ images of you going out on top, instead of paying a lot of money to see you sweat it out and sip water on stage, clearly struggling to get through the set? Now that’s nothing to fuck with.