A petition has launched in Britain to rename the Canterbury Train Station after Kanye West.

In a petition on Change.org, commuter Mark Kilner has appealed to the rail and council bosses of the area to rechristen the station in Yeezy’s honor.

Kanye West (wealth be upon him) is more than just another celebrity propping up the hit parade; he is the greatest human being of our time, a latter-day Moses whose Coming was prophesised on the front of David Bowie’s seminal work Ziggy Stardust and the Spiders from Mars. (There’s a sign saying “K. WEST” on the cover; look it up on Google Images if you don’t believe me.) Moses brought Ten Commandments down from Mount Sinai; Kanye (wealth be upon him) has already brought us six studio albums – with a seventh due out soon. (I admit I haven’t actually listened to any of his music, but that’s only because I consider my humble ears to be unworthy of such auditory genius.)

Kilner goes on to note that, “We cannot undo any past wrongs such as retroactively giving Taylor Swift’s Grammy Award to Beyonce… but we can show our appreciation in other ways, and what better way to start than by renaming Canterbury West Station to Kanye West Station?”

Here is a depiction of what Kilner hopes the station to look like, should the petition be successful (yes, that’s a gargantuan golden Yeezy head up there, overlooking the comings and goings of Kent’s commuters): 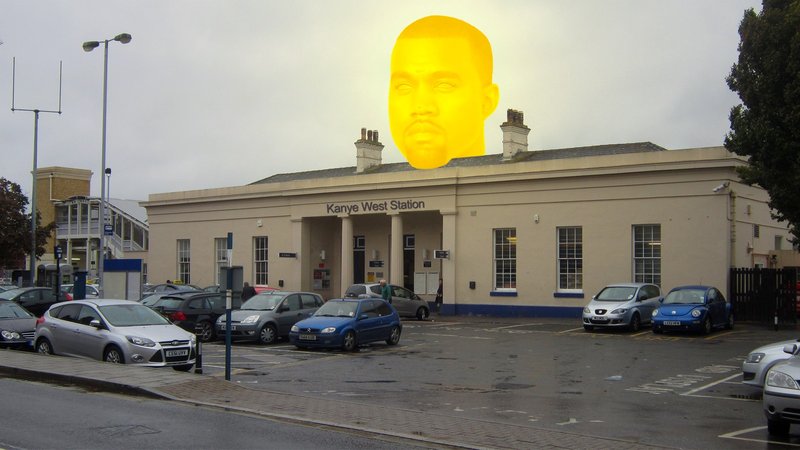 The tongue-in-cheek petition was first set up back in March, originally attracting a mere 19 signatures. Following a recent spike in media attention over the past week, the page has now leapt ahead, with more than 2000 signatures. It’s now remarkably close to its 2500 goal. You can join the cause right here!

The rapper/presidential candidate is no stranger to petitions, with a movement of over 135,000 people putting their names down in an attempt to stop him headlining Glastonbury Festival back in June, a set which received more than 44 complaints.