N.W.A, the infamous rap group from Compton consisting of Eazy- E, Ice Cube, Dr. Dre, DJ Yella and MC Ren are once again making headlines, with the announcement that they will be inducted into the Rock and Roll Hall of Fame.

Appearing on the ballot for the 4th year in a row, the group will be inducted alongside Cheap Trick, Deep Purple, Chicago and Steve Miller.

N.W.A have recently returned into the spotlight with their successful film Straight Outta’ Compton, which tells the gritty and true story about the groups formation from the streets of Compton and onto the world stage.

Ice Cube, one of the group’s key members and a proficient lyricist reflected on what the inductions means for him personally and the group as a whole, “It means that the group’s mark is kind of solidified. It’s all legitimised in a way because the whole music industry has to honour the group in a way. It’s just hard to sum up in words, really.”

Fellow N.W.A member, Dr. Dre was humbled by the news, “I have always done what I love to do, so to be inducted into the Rock and Roll Hall of Fame is unreal. I am humbled to be included in such an amazing group of great artists.”. 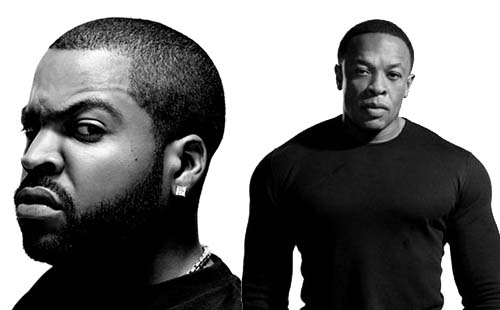 Tragically Eazy-E, the self-appointed leader of N.W.A will of course not be around to witness his groups induction into history, having passed away March 26th, 1995 due to complications of AIDS. It is presently unclear if the rap groups two other surviving members, MC Ren and DJ Yella will be attending the induction ceremony alongside Ice Cube and Dr. Dre, or if other rappers will perform with the group on stage.

The group will be inducted on the 8th of April 2016, in Brooklyn’s Barclays Centre.