In a divisive move, Billboard have named Lady Gaga as their Woman Of The Year 2015. The announcement has been received with reactions of surprise, derision and applause. The first is definitely understandable; following her flop release Artpop in 2013, Gaga as we knew her seemingly fell away. With audiences and headlines no longer enraptured by what had been a phenomenal hit machine, or waiting for her next exhibition – or which foodstuff she was going to wear next. It was like the Haus Of Gaga had shut up shop.

In all honesty, once you’ve been vomited on on stage, it’s hard to know where to go next. And it seems that Gaga came very close to abandoning her career towards the end of last year. In her interview with Billboard, though treatise might better describe it, she describes the point at which she had arrived by the end of 2014; “My stylist asked, ‘Do you even want to be a pop star anymore?’ I looked at him and I go, ‘You know, if I could just stop this train right now, today, I would. I just can’t. [But] I need to get off now because I’m going to die’.”

A dramatic statement that feels appropriate for the artistic soul that Lady Gaga has proved herself to be, but clearly one that she meant. In the interview she comments on how “It speaks volumes to me that I’m being recognised as Woman of the Year in 2015… This is the year I did what I wanted instead of trying to keep up with what I thought everyone else wanted from me.” And despite the undeniable truth that other artists have fared better throughout the year in a commercial sense, or made bigger waves with their releases, there is something compelling in Billboard’s justification for naming Gaga Woman Of The Year. 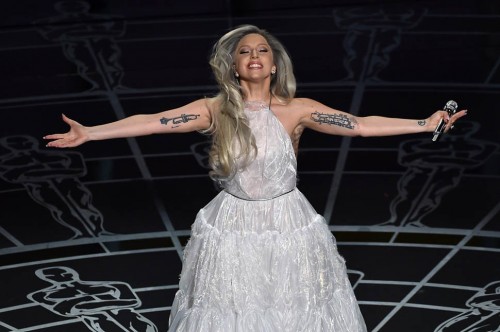 The publication freely admits that “Gaga’s biggest role this year, though, may have been that of the crusader.” And much of the interview discusses the different projects that she has taken on throughout 2015, once she stepped back from chasing the hits. Also the sense of true accomplishment that came with things like her 2014 album Cheek To Cheek with Tony Bennett, feeding her love of music rather than a love of fame; “I’m not just doing it because I like standards. I am an Italian-American girl from New York who won state jazz competitions in high school for my abilities. I was born to sing with Tony”.

Also mentioning her work with her Born This Way foundation, her small screen debut in Ryan Murphy’s American Horror Story, and various live performances like her rendition of The Sound Of Music at the Academy Awards. Concentrating on her philanthropic work and celebrating her true musical talent – something which is easy to forget when it’s dressed up in the butcher’s window display – I can’t help but agree with Billboard’s reasoning. And while there is a great deal that is off-putting in Lady Gaga’s theatrical style, and the inescapable performance of her words, her call to “purify this industry” does resonate as coming from a talented artist who has crawled, exhausted, away from the profit driven, creatively downtrodden world of music.

“I call on every artist to be kind to one another, and compassionate. Let us purify this industry again and put our finger in the face of every executive and say, ‘If you are spending money, is it on someone who can really sing? Is it on someone who has a perspective?’ It’s almost funny to see the look on Tony’s face, the way he shakes his head, when I tell him how the industry has become.”

Though you can’t help but wonder if Gaga would have said the same when the world at large was applauding her own perspective and talent. Whether this is one of the “epiphanies” that she mentions in the interview, or whether her own Frankenstein has become embittered by the betrayal of the industry that spawned her?