Tis’ the season to be sitting in sweltering heat with your family drinking beers, eating food until you hate yourself and enjoying Christmas the Australian way. No doubt you’ve hopefully endured the worst of the silly season: the last minute shopping feat. endless queues, the crippling indecision over what the hell to buy for anyone, frantically trying to tie up all your loose ends at work before the end of the year, all of it set to an abominable mess of what some people call ‘Christmas carols’ but a lot of people call a living, shrieking hell. 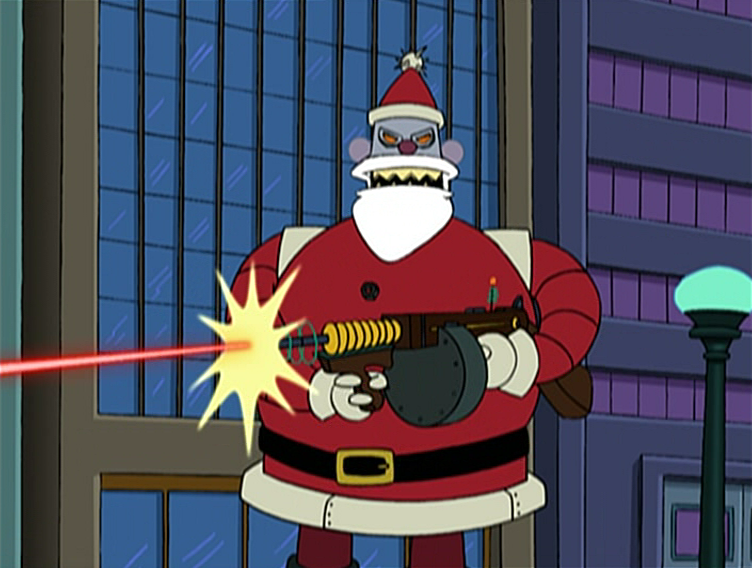 With a foreword by evil robot Santa.

We know a lot of you are at home right now with a zillion and one presents to wrap and procrastinating hard on it. To that end we’ve come up with a mini hip-hop playlist for you to jingle some bells to this Christmas Eve.

Because the hip-hop universe has an interesting and different perspective on nearly everything, their take on Christmas carols (and there are a whole lot of them), often makes for fascinating listening. These aren’t your grandmother’s Silent Nights or O Come All Ye Faithfuls. Sometimes it works and sometimes it falls flat, but Lord knows I’d rather listen to any of these than yet another soulless Michael Buble Christmas album:

For a record label named Death Row, this is inexplicably jolly, at least to begin with. We have the heretofore rare combination of a G-funk beat and sleigh bells before the late great Nate Dogg kicks things off, backed by his own Gospel choir and crooning in that unmistakeable West Coast baritone. The hip-hop and Christmas collisions are many: posting up but with eggnog, getting a gift for your grandpappy only you stole it! Snoop Dogg playing the role of Santa Claus but he’s dressed in an all black smoking jacket!

It’s pretty bloody awful really and the long-haired Snoopy Claus is somehow even creepier than the Krampus ripped straight from the pages of your darkest nightmares, but it’s a start, and hey, run that silky smooth, bass-heavy beat behind these guys without all the Christmas motifs and you’ve got yourself one heck of a rap song.

Kurtis Blow, one of rap’s trailblazers. A man so tenured in the hip-hop game that much of this list wouldn’t be possible without his contributions. At 56 he’s also ancient, so so ancient, but back in his hey day at the turn of the 80s there were almost none out there who could hang with him. The Breaks is one of the ultimate party rap songs of all time, while Basketball remains the premiere hoops-related song in all of hip-hop, something that is no small feat.

Almost lost as a bonus track on his eponymous debut album all the way back in 1980 was Christmas Rappin’, a deliciously dad joke title for a fun little rhyming ditty. This one gets extra points for not a single fucking sleigh bell in sight. Blow raps the story of his Christmas Eve and his encounter with one Saint Nick. The beat is ultra smooth and Blow raps oh so cooly over the top of it, utilising his signature call and response flow style to get the crowd right into it.

If you saw recent Seth Rogen-Joseph Gordon-Levitt collaboration The Night Before you’d be familiar with this song from the outstanding karaoke rendition the film’s three main characters gave it.

Run-D.M.C. became part of rap’s second generation following Kurtis Blow. A lot of the cheesy elements and the simplistic flow were still there but with a bit of a harder edge on it, and with hip-hop fashion beginning to take off with them. Hollis refers to the neighbourhood in Queens where the members of Run-D.M.C. grew up so you knew this one was close to the heart for them.

The track was co-produced by Rick Rubin himself and though it didn’t make a splash back when it was released in 1987, years later it made it all the way into the Top 100 songs of 2000 for reasons we’re not sure of. It’s a wonderful little rhyme about finding Santas wallet and spending Christmas at your mum’s. The music video is pure cheddar and we can’t recommend it highly enough.

Oh boy, Eazy-E’s foul-mouthed mashup of Jingle Bells, Twelve Days Of Christmas, O’ Christmas Tree and a whole lot of others is just so Eazy it hurts. There’s an intro from the Dolemite (you know, the 70s blaxploitation star famous for taking names and giving zero fucks) telling the traditional Christmas story of Eazy-E (they must have skipped that one at my primary school).

The song also features fart noises, liberal use of the word ‘hoe’ and its rhyming variants as well as Eazy-E signing off wishing everyone a merry motherfucking Christmas and a fucked up New Year. My sentiments exactly.

Top dog on this list though is a man used to being top dog of pretty much every single list he’s featured on in Kanye West. It’s so good because it’s a Christmas song but it still sounds like vintage College Dropout Kanye (everyone’s favourite Kanye). Featuring an all-star cast of Kanye’s Little Helpers too, with Cam’ron, Pusha-T, Cyhi Da Prynce, Big Sean and so many others.

Each of the rappers aboard gives their own unique take on their traditional Christmas experience (of course Kanye’s is about fucking). On paper it shouldn’t work whatsoever but the more I listen to it the more I absolutely enjoy this. How about giving us all Swish in our stockings this year Yeezy?