Azealia Banks, the 24-year old Harlem rapper, has once again snatched headlines for questionable behaviour. This time it’s for assaulting a female bouncer at Meatpacking club Up & Down.

Azealia Banks has gone through a spree of aggressive behaviour lately, making the news with antics that include beating down a security guard at L.A’s Break Room 86, and also throwing out some casual homophobic slurs at a flight attendant on a Delta flight from New York to LAX. 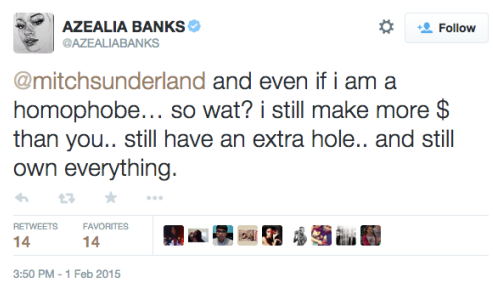 The Harlem rapper can now proudly add “biting” to her already impressive assault charges, after lashing out at a female security guard because she wasn’t allowed into the “exclusive” area of the club in question. The club’s manager – prior to the bite – attempted to deescalate the situation by giving the rapper the stamp required for entrance only for her to become more upset once inside and assault the female security guard.

“It appeared that she was offended that the security did not know who she was or recognize her as a celebrity. This resulted in an altercation, which another insider tells us also involved her spitting in the owner’s face, and it ultimately led to her being escorted out by the female security guard who became the victim of Banks’ alleged assault,” E! Online reports.

The NY District Attorney commented that the bite left the security guard with, “redness, swelling, serious pain and bruising”.

After being escorted out of the premise, Azealia Banks allegedly punched the same female bouncer and was quickly thereafter arrested by police. The rapper now faces charges of misdemeanour assault, harassment and disorderly conduct, leaving us to seriously wonder about the state of her mental wellbeing. #PrayForAzealia