As we approach the one year anniversary of the tragic passing of A$AP Yams, A$AP Rocky has joined forces with fellow New York native Joey Bada$$ for a tribute concert in memory of their fallen friend.

‘Yams Day’ will take place on January 18th in New York City, the home of the A$AP Mob, featuring performances from Rocky, the Mob in its entirety, Lil Uzi and of course Joey Bada$$. The concert promises to be a moving affair, and we can think of no better celebration of the life of Yams than a lavish, loud, and lively concert put on by his closest friends.

2015 has been one heck of an emotional rollercoaster for Rocky, but even amongst the launch of his latest album, At.Long.Last.A$AP, a world tour announcement and a further foray into fashion, he has found time to pay homage to his closest friend, and the founder of the A$AP movement. The tragic and unexpected death of Yams prompted a swift album cover change, with his fallen friend’s iconic birthmark plastered over Flacko’s face- an everlasting image of support.

Even whilst touring over Thanksgiving, Rocky was unveiling musical tributes to Yams, in the form of Yamborghini High; a rowdy, energetic track which yet again personifies the lavish lifestyle that these young rappers lead. It’s rather humbling to see that no matter how much success comes Rocky’s way, no matter how many smash records or zero’s in his bank account, he has continued to remember his friends, and ensure that the memory of A$AP Yams comes along for the wild ride that is sure to continue far into the future. 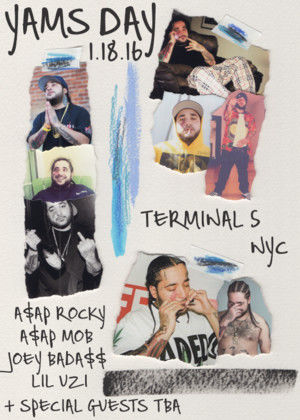