A 25-year-old woman has died and a 22-year-old woman is in a coma following the Sydney leg of Stereosonic Festival, which took place yesterday at Olympic Park. Almost 70 punters were also arrested on drug charges at the event which saw nearly 50 000 attendees, headlined by artists including Carnage, Armin Van Buuren and Major Lazer.

Police were out in full force, with their (often misguided and futile) attempts to quell drug sales and use at the event through increased numbers, added drug dogs and heightened security. 69 people for possession or supply charges and a further 23 were issued a cannabis caution. So it was probably seen as a successful day for the cops.

The 25-year-old woman reportedly felt ill at the event, and was taken to Concord Hospital where she died. A 22-year-old woman is currently in critical condition in Westmead Hospital. The official cause of death is yet to be determined.

Stereosonic was treated as a major police operation, which brought together a myriad officers from the South West Metropolitan Region, the Dog Unit, Mounted Unit, Public Order and Riot Squad, Traffic and Highway Patrol, and Police Transport Command.

“The police operation is about minimising harm and providing a safe and secure environment for revellers to have a good time,”said Frank Mennilli, Assistant Commissioner and commander of the operation. Mennilli went on to express his “disappointment” at the behaviour of many in attendance. “This number is alarming and disappointing, especially after we warned revellers about the dangers of drug use,” he says.

Stereosonic festival organisers Totem Onelove provided the following statement on the official Stereosonic Facebook page: “Totem Onelove conveys our deepest condolences to the friends and family of the patron who tragically passed away on Saturday night at Sydney Stereosonic,” a spokesperson said.

“We appeal to our audience that they stay safe and look out for each other.” 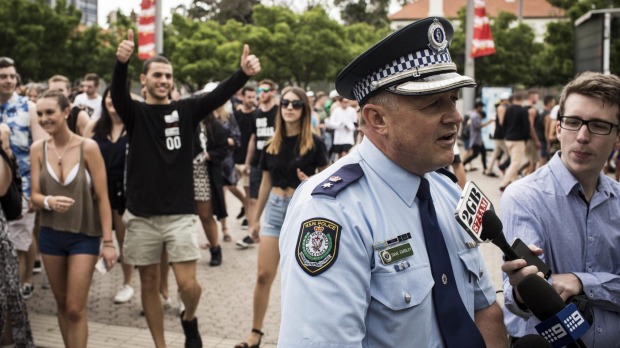 The news follows the arrest of two men who were allegedly attempting to hide drugs inside the festival complex last week.

Yesterday was one of the busiest days Olympic Park has seen since wrapping up the 2000 Olympics: as well as Stereosonic was a Taylor Swift concert, the Australian Swimming Championships and the Aus X Open meant that around 150 000 people were estimated to be within the complex.

Look. If police genuinely believe that their behaviour counts as “warning revellers of the dangers of drug use”, and that said warning is going to reduce harm and prevent people form using, buying, selling, or abusing drugs, then nothing’s going to change. Simple as that. Increased police numbers leads to nothing other than increased arrest numbers, and while you may argue that confiscating drugs from those 69 people is saving lives (it may well be), the real issues have still not been addressed. More drug dogs are not the answer, a bigger police presence is not the answer. If anything, these ominous surroundings can serve to increase fear and distrust, which can occasionally lead to tragedy in itself, such as what happened at Defqon in 2013, when a man died as the result of panicking at the sight of drug dogs, and ate his entire stash to avoid detection.

Yesterday’s death serves as a reminder that we need readily available drug testing kits at festivals, to make information more available about safe use and harm reduction.

Read this next: I was strip searched on the way to a music festival