A lot of us have a pretty set image of Nicki Minaj, and those images mostly involve her bubblegum antics, bubblegum lipstick, and, let’s face it, her bubble butt booty. But setting that aside momentarily, let’s take a look at the moment when Nicki Minaj absolutely nailed it. And by “it”, I mean integrity, elegance and sincerity.

Speaking at an A&E benefit promoting open, honest conversation around race, Minaj took to the stage as part of a concert special. The event, “Shining a Light: A Concert for Progress on Race in America,” which airs tonight, also featured Ed Sheeran, Pharrell and Bruce Springsteen, amongst others, and addressed racial inequality in America. In the past Minaj has been outspoken about many of the issues on the table; misogyny, racism and sexuality, but this time she seems to have found exactly the right words.

Paying tribute to Maya Angelou, the poet who sadly passed away earlier this year, Minaj recited her 1978 poem Still I Rise. For those Nicki Minaj fans out there, they will know that she released a song of the same title in 2008. The poem is a series of rhetorical questions and challenges, as Angelou disposes one by one of the criticisms and injuries levelled at those who experience racial prejudice. 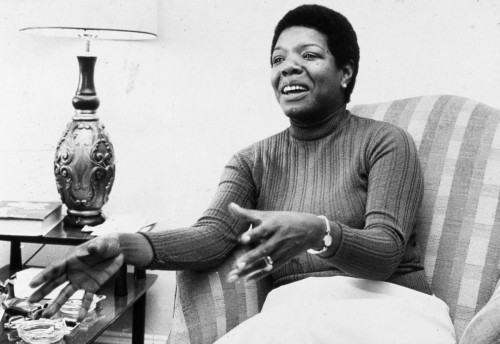 The poem has a universal message for anyone who is downtrodden, or experiences prejudice, and as such as been appropriated by any number of people – even as just a personal mantra. And there is no denying that a number of lines feel fitting from Minaj’s personal context:

Does my sexiness upset you?

Does it come as a surprise

At the meeting of my thighs?

Paying tribute to the late Angelou, and setting those powerful words in such a fitting context, I’ll say it again – Nicki Minaj absolutely nailed it.

You can watch Nicki Minaj’s delivery of Still I Rise below, and read the poem in full.

You may write me down in history

With your bitter, twisted lies,

You may trod me in the very dirt

Does my sassiness upset you?

Why are you beset with gloom?

Pumping in my living room.

With the certainty of tides,

Did you want to see me broken?

Weakened by my soulful cries?

Does my haughtiness offend you?

Don’t you take it awful hard

Diggin’ in my own backyard.

You may shoot me with your words,

You may cut me with your eyes,

You may kill me with your hatefulness,

Does my sexiness upset you?

Does it come as a surprise

At the meeting of my thighs?

Out of the huts of history’s shame

Up from a past that’s rooted in pain

Welling and swelling I bear in the tide.

Leaving behind nights of terror and fear

Into a daybreak that’s wondrously clear

Bringing the gifts that my ancestors gave,

I am the dream and the hope of the slave.