Over the weekend, the Darebin Music Feast wrapped up their ten-day-long program of 100 unique music events. One of those events was the LISTEN Conference 2015, which was held at the Northcote Town Hall on both Saturday and Sunday. As devoted music fans concerned with equality, sexism and issues of transmisogyny in the industry, we’ve admired the work LISTEN is involved with a fair a bit and were undeniably (and perhaps overly) enthusiastic about the inaugural conference in the lead up to the weekend. With two days packed full of discussion and so much to take on board and process, it’s almost impossible to recap the entire weekend. With that in mind, here is a list of some of the top discussion points, though there were many, many more.

Melbourne is failing as a music city

Perhaps a controversial statement to kick things off with, but an important one. Melbourne often likes to think of itself as the music capital of Australia and indeed, as one of the world’s best music cities. We’re very proud of the protections in place to prevent live venues from closing down due to noise complaints, but what about the protections needed to prevent violence and sexual assault inside those venues? As panelist Helen Marcou, one of the founders of SLAM (Save Live Australia’s Music), put it: If we can’t provide safer spaces, then we are failing as a music city. There needs to be a heavier focus on the liaison between outsourced security guards and venue staff to protect not only the clientele but also performers within those venues. With some venues working on training their staff in dealing with sexual assault response, the hope is that not only will victims feel confident in reporting a perpetrator without fear of being brushed off or kicked out into the street with the person who wants to (or has done) harm them, but that patrons will be aware that such behaviour is not tolerated anywhere – especially in live music venues.

Australia has a major hard-on for one-chord, white guy music

That Australian radio has an insatiable appetite for music that not only sounds but looks very much the same is not a new observation. However when it’s said out-loud by the artists the “one-chord, white guy” music doesn’t represent (artists of colour, female musicians, LGBTQIA+ artists, disabled musicians) hits hard. Panelists including musician, transgender femme and founder-owner of  record label Girls Who Smoke Poke, Simona Castricum, spoke about their experiences and expressed their frustration with the not being listened to but simply being heard. Influencers from radio djs and the online music media are aware that there is a much greater diversity in Australian music, but it isn’t reflected in the playlists or coverage.

Being a fan comes at a high cost

Not just the financial cost for all the late-night taxi (or Uber) rides home, but a heavy cost from the angle of emotional and physical safety. Female fans are constantly called upon to prove that they know “enough” about a band to be worthy of seeing them in a live setting or liking them at all in the first place. Often, women of all ages are confronted with event organisers and other audience members presuming that the only role they play in the audience is one of supportive girl/friend role or the fangirl. The discussion grew into one of elitism within certain music scenes as well as an important part of the live music experience which had yet to be addressed in previous panels: getting home after a gig. While it’s easy (and indeed our right) to say that women and members of the LGBTQIA+ community should feel safe in going to a gig alone and travelling home alone at night, it is often not the case. Short of spending a small fortune on taxis from venues (which many people have been made rudely aware through personal experience, aren’t always a safe option in themselves), suggestions included buddy-tracking phone apps.

Tokenism is still a thing

Being a person of colour in the arts and entertainment industries is notoriously difficult. Not simply for the lack of opportunity or representation, but for the tokenism placed on artists who do find themselves making their voices heard and their work known. There was a heavy discussion regarding the experiences of being the sole ethnic person on a lineup or within the workplace and whether or not that was a positive or negative thing. Positive for it does begin to further promote inclusiveness and diversity in music, negative for it perpetuates a notion of white saviorism and tokenism. One of the  most universally useful tools to come out of the panel was a suggestion of how to become a better ally: being open to being confronted by one’s own privilege while having a respectful discussion to learn another person’s experiences.  Listening, not just hearing, as it turns out, is the key. 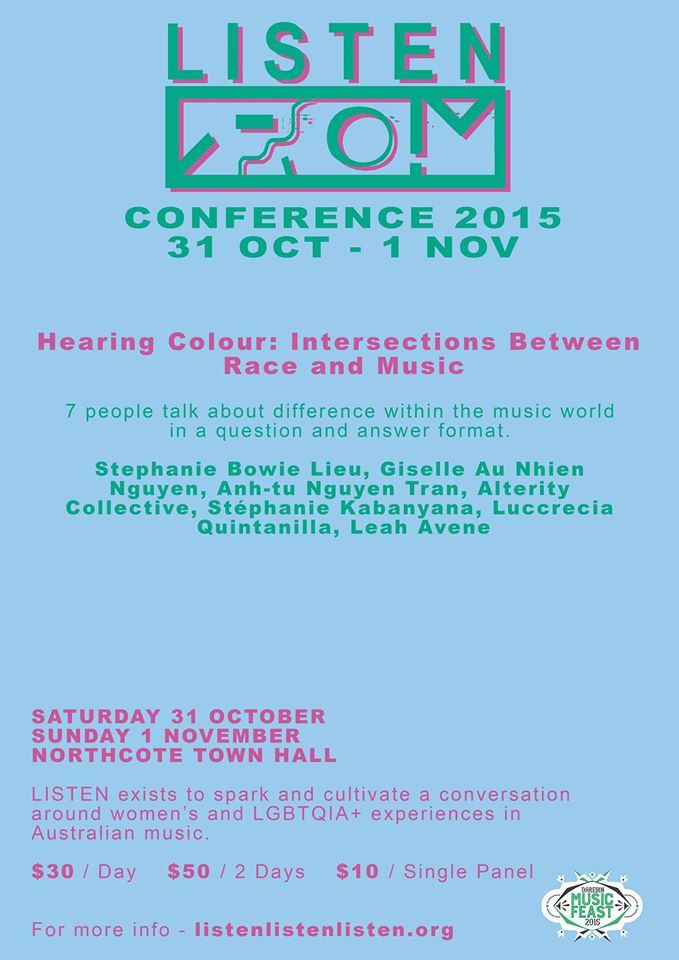 The wonderful thing about the LISTEN conference was that it took the discussions that people have been having through writing and projected them into a live, interactive setting where practical solutions could be offered and discussed. Not only a space for discussion but for action and networking and discovering resources, LISTEN Conference 2015 was undoubtedly an invaluable event which, with support, will hopefully be returning next year.