Hell hath no fury like a Metallica fan scorned.

This week has been Bieber Week on The Ellen Show, a huge promotional effort to hype up the Canadian pop-star’s upcoming album Purpose including the obligatory fan meet-and-greet and a chat with Seth Rogan in which he explained the thought process behind stirring up “beef” between them last year (turns out, there was none). An entire week of Justin Bieber probably wasn’t ever going to go over well with everyone, but there’s one demographic particularly disgruntled with the entire situation: Metallica Fans. Or, as they’d prefer to be called, fan’s of real music.

If Justin Bieber can stop wearing Metallica shirts that’d be great… Sincerely, those of us who listen to real music

Evidently, Metallica are still relevant, the pinnacle of great music, reserved for people who aren’t Justin Bieber to enjoy and not at all the constant butt of jokes.

In a classic case of music elitism and the strange sense of possession that sometimes accompanies it, people have taken to Twitter to express their pure outrage at Bieber, who dared to wear a Metallica shirt during some of his media appearances. Also upset (to a seemingly lesser extent) are Nirvana fans because, you guessed it, he’s been getting around in one of their tees, too.

It’s pretty similar to what happened last year with Hayley Williams from Paramore and the lead singer of 5 Second of Summer, who dared wear a Misfits shirt while performing at the Billboard Live Music Awards. 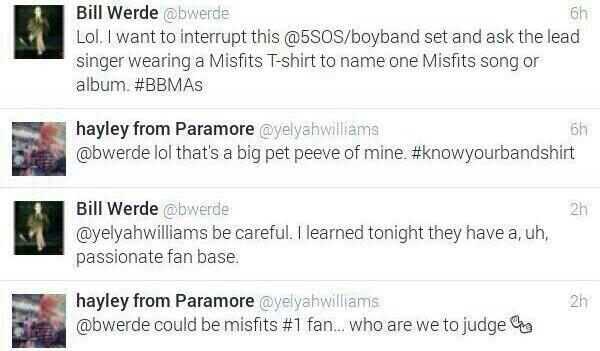 Some pretty quick back-tracking there

Let’s get something straight: being in a poor excuse for a band doesn’t negate your right to be a fan of anyone. Just like being one of the biggest pop stars in the world doesn’t mean you’re completely clueless about other genres of music.

By that stellar logic, Justin Bieber probably knows exactly who Metallica are.

Oh and by the way,  the joke is on just about all of Twitter because today marked the announcement of the first round of dates for the Purpose World tour.  I bet Bieber’s got a different Metallica t-shirt for every single date. Watch this space for when he announces any Australian dates too, which we hope will be very, very soon.