Come December 3, it won’t just be George Harrison’s guitar that gently weeps, but the hordes of Beatles fanatics who will lose out on the opportunity to own the very first pressing of the band’s iconic White Album as it goes up for auction. Properly titled The Beatles, the 1968 recording has taken it’s place in the music hall of fame as one of the most iconic albums every recorded.

The Beatles’ ninth studio album, and mostly written during their famed time in India exploring transcendental meditation, the White Album holds songs like Back In The U.S.S.R. and I’m So Tired. It is commonly known that the first four pressings went to the Beatles themselves, but previous comments from Sir Paul McCartney implied that the very first went to John Lennon, who “shouted loudest” for it. However, it turns out that during all the shouting, the quietest member of the band, drummer Ringo Starr, took it. Locked away in a London bank vault for decades, Starr announced earlier this month that it would be included in an auction of Beatles memorabilia. 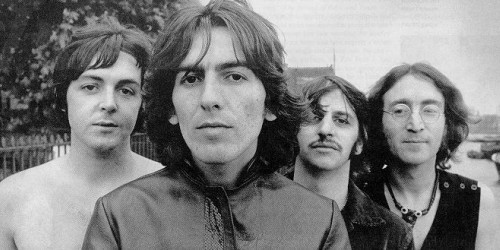 Identified by the stamped serial number, there can be no doubt that this is the original pressing. Bidding on the record starts at US $20,000, but it is estimated to fetch up to $60,000. Copy No 0000005 of the album sold at an auction in 2008 for around $30,000. Other items appearing in the auction include jewellery and clothing worn by Starr, a Roy Lichenstein painting and also George Harrison’s Gretsch Tennessean guitar, which is expected to fetch up to $200,000.

All proceeds from the auction will go to the Lotus Foundation, founded by Starr and his wife, Barbara Bach, to “fund, support, participate in and promote charitable projects aimed at advancing social welfare in diverse areas”. It will be held at Julien’s auction house in Beverly Hills, December 3 to 5, the same house where other Beatles memorabilia has previously sold for record prices.