[EDIT: In response to this article, others have come forward. Read the story of how burlesque performer Vesper White was stopped and strip searched on the way to perform at Parklife in 2011.]
There’s no denying the bond between drugs and music festivals. Fact is, a lot of people use substances at a festival, be it alcohol or something illicit. Measures to combat or (from a more patron-friendly perspective) regulate drug use at festivals are wide-ranging and often problematic in nature. Some punters may escape the dogs and the police with huge quantities of pills hidden where the sun don’t shine. Others, like me, don’t carry a single piece of contraband, and are treated with the kind of suspicion and aggression usually reserved for terrorists.

It happened as my friends and I were driving along the Murray River on the way to Strawberry Fields, a renowned bush doof/festival held annually near Tocumwal, near the NSW/Victorian border. As we were about 20 minutes out from the festival, we rounded a corner into slowed speed zone. What came next took us completely by surprise.

Set up on the side of the road was an army of cops. Looming ahead sat an ominous drug testing bus, while sniffer dogs and Victorian police were everywhere. This was nowhere near the entry to the festival, this was a random spot on the side of the road. Being a car filled with young people, we were immediately flagged down.

As soon as we were stopped, we were all asked for identification. We were told to exit the car, which the police then combed from top to bottom. None of us had any drugs or other pieces of contraband on us, but this didn’t seem to matter – even after they finished searching.

We told the police we had nothing, but they treated us with the suspicion someone actually carrying drugs would expect to receive. I was asked if I had ever done drugs, did I know drugs would be present at the festival and would I be doing drugs at the festival?

“Um, ahh, oh I don’t know, I think there will be?” I stammered awkwardly. How was I supposed to answer questions like that? Of course there would be drugs at the festival; IT’S A MUSIC FESTIVAL. My ambivalent answers were born out of a place of confusion and panic. I also have the unfortunate tendency to smile awkwardly when under intense scrutiny. If I answered wrong, what did that mean for me? Would I be fined? Charged? Arrested?

Unfortunately my hesitation was interpreted as non-compliance. They became convinced that my unwillingness to answer questions directly was an indicator that I had drugs on me.

“You’re being a bit evasive with your answers. You know most people would just answer no to the questions were asking if they were innocent,” one of the police told me in a condescending tone. It’s pretty hard to feel confident asserting your innocence to three policemen who don’t believe a word you’re saying. I guess omittance is no quittance, as Shakespeare once said.

So they gave me a drug test while they took my friend Josh* to have a pat down down and my other friend Emily* to a tent to be stripped searched. Then the sniffer dog decided to plonk itself at my feet.

“The sniffer dog has indicated that you have something on you, so we are going to have to conduct a strip search on you,” said the policeman with thinly-disguised glee. They’d got me.

I was escorted to a tent by the side of the road and required to take all of my clothes in front of a female police officer, while she ruffled through all of my items in search of the drugs that I was apparently still hiding. She actually made me squat – totally, completely naked – in case I was hiding anything, erm, inside myself. All of this, on the side of the road, in front of a stranger.

I felt violated to the point of tears. How did the police have the right to just strip search people on the side of the road? At the entrance of a festival, perhaps I could understand it more. You know what you may be subject to when buying a festival ticket. It’s just a condition of entry that people must comply with.

But to be pulled up on the side of the road and forced to get naked when they had already searched us and found nothing? I’m not saying the police were acting illegally – they weren’t, everything they did was completely legal. But it doesn’t make it right, and it certainly doesn’t make me trust them. This article is not about the legality of this incident. 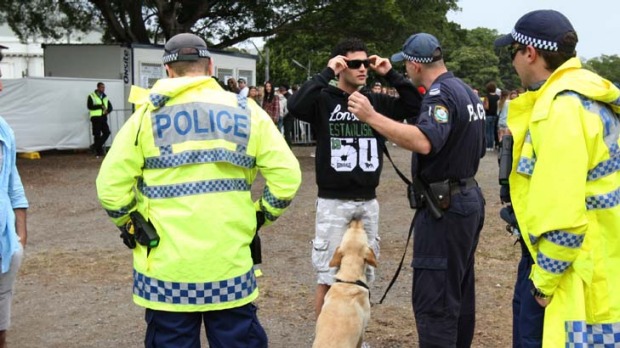 One of my biggest regrets was not asking the police why they had the right to do this. I think most young people or punters are too scared to ask questions in case it causes more trouble for themselves. The first thing the police told us was, “If you guys have anything on you, now is the time to declare it. If you tell us now, you’ll just receive a slap on the wrist.” Pure intimidation tactics meant to scare people into confessing.

The worst thing about the entire process of drug searches and prosecutions is that you’re guilty until proven innocent. Police appear to have infinite powers when it comes to suspected drug possession. If a dog sits at your feet, say goodbye to your rights. The kind of protections normally put in place by the law are suspended in the case of legally broad and powerful policy of ‘probable cause’. And if you resist their search, you can be charged with hindering the law.

The entire effect of this system is incredibly dehumanising. They take away your right to say no; they strip you of your dignity and your privacy – not to mention your clothes – and worst of all they criminalise otherwise innocent people. Lockouts, drug convictions for minor possession charges, strip searches… Sometimes it feels as if there is a war on young people. Why am I guilty by default because I’m a young person who was in a car on the way to a music festival? We weren’t swerving, we had nothing on us, and yet we were still treated like criminals.

Strip searches by the side of the road are not going to stop people buying or using drugs. All that does is incite intense fear and distrust, not to mention humiliation and dehumanisation. Was I committing a crime? Was I on drugs? Was I hurting somebody? No. A dog had sat by my feet. That was all.

Dogs and this kind of aggressive treatment is not the way to quell harm and drug use. Regulation, testing kits, education and information are the ways to minimise harm, and in turn perhaps even drug use. Education and regulation, not side-of-the-road strip searches. Prohibitive measures don’t work, we know they don’t. We need to update our archaic drug laws and we need to stop being treated like criminals when we’ve done nothing wrong.

After we were let go, all of us felt sick to our stomachs. And angry. Deeply, deeply angered by the treatment we’d received. But perhaps worst of all was the feeling of powerlessness. We couldn’t have done or said anything to stop what was happening. It makes you feel like you don’t have a voice sometimes.

For the record, the Strawberry Fields was still awesome. I’d highly recommend it to anyone.

*Names have been changed