For those of you who have already locked down this year’s finale, and will be celebrating those last few days of 2015 (or seeing in 2016 up in Byron Bay) at the epic Falls Festival, now is the time to get your game on. This week Falls have announced set times for all locations, and all dates, so you had best get planning. Guaranteed clash free and packed with awesome artists, if you haven’t already bought your ticket this might help seal the deal as they are selling fast!*

With the opportunity to celebrate the new year at any of the three locations, Falls have now confirmed the acts who will be headlining for the countdown. Catch Foals, The Avener, Django Django playing December 31 at Lorne (VIC) plus DJ Yoda who will see in the new year. Tasmania’s Marion Bay will be hosting UK indie giants Bloc Party as well as Disclosure, King Gizzard & The Lizard Wizard and Courtney Barnett, amongst others, on the same day. And not forgetting Byron Bay (NSW) where festival goers can catch The Wombats, Peking Duk and even Weird Al Yankovic as 2015 draws to a close.

And don’t forget your fancy dress outfits. The first night at each event has a theme which you wouldn’t want to miss. This year it’s “Tinseltown”, so best get your glitter and glamour ready!

With some acts still to be announced, you can check out the full line ups at The Falls website – including music, arts and comedy for all events. Tickets can also still be purchased for Marion Bay and Byron Bay here. 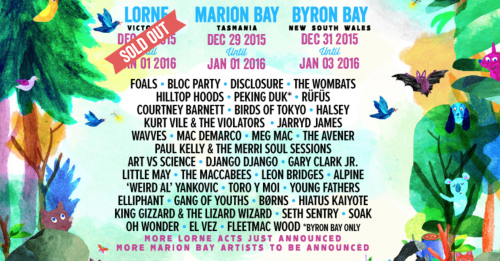 Click through below for the full playing times at each event, and have a listen to the Falls Festival line up playlist if you’re still not convinced.

*Lorne event is now sold-out, with only locals tickets on sale