The latest in the long-running line of entrepreneurial rappers, Eminem and his very own Shady Records have announced a partnership with crowdsourced lyrics website Genius.com.

Anyone who has a) liked rap and b) had the internet over the past few years or so will undoubtedly know genius. Born in 2009 with the humble title of rapgenius.com, it immediately became a hub for learning about lyrics and pre-social media online arguments. The site went on to achieve massive success – in 2014, it expanded to include other genres of music, reflectively changing its name to Genius. However, the focus will, and always will be on hip hop – and now that’s a guarantee, thanks to the real Slim Shady.

Genius is the ultimate online hub for lyric annotations, for delving deeper into the stories behind your favourite artists and their songs. It’s particularly useful for hip hop, considering the thousands upon thousands of references, specific lingo, historical context and more that would be impossible to pick up on from just listening, or even reading through the lyrics.

“Coming up we would always obsess over the lyrics from our favourite MCs. Picking everything apart, trying to get into their heads,” wrote Eminem in a press release today. “I still do that today and Genius helps to make it a worldwide conversation. Pretty amazing to me.”

Eminem’s manager and co-founder of Shady Records Paul Rosenberg, also said that “Genius provides an avenue for fans to dig deeper into their favourite songs, but more importantly, it gives artists a way to communicate their artistic intent directly to those fans. For an artist like Eminem, the intricacies and nuances in his lyrics are very layered and his art is a perfect fit for this type of tool. We’re excited about what this partnership brings for both sides.”

Earlier this year, Eminem annotated no less than 42 of his own lyrics. He joins artists including RZA, Raekwon, Ghostface Killah, A-Trak, producer Rick Rubin and plenty more who have annotated on site. 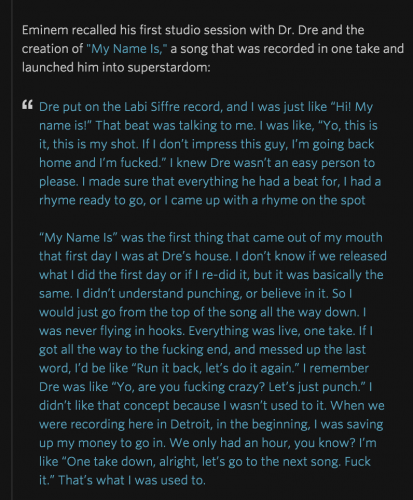 Eminem annotating ‘My Name Is’ on Genius