TIME Magazine have nominated hip-hop superstars Drake and Nicki Minaj for their esteemed Person of the Year Award. The pair are joined by musicians Taylor Swift and Adele, as well as celebrities such as Kim Kardashian West, Jennifer Lawrence, Caitlyn Jenner, Stephen Colbert and Amy Schumer. Among the other nominations include a bunch of unimportant people with confusing names, like Narendra Modi, Elon Musk, Tim Cook, Mark Zuckerberg, Vladimir Putin and Angela Merkel.

Currently leading the poll is US Presidential candidate Bernie Sanders, who joined none other than Run The Jewels’ Killer Mike for lunch and a tour of his native Atlanta earlier this week. 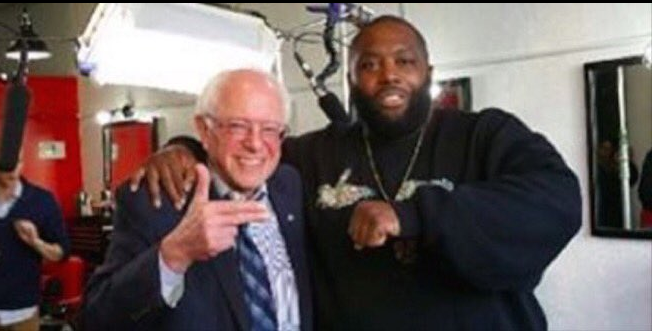 He gets our vote just for agreeing to this photo.

While we’re big Drake and Nicki fans around here, we can’t help but feel that their contributions to society may not be as important as some of their fellow nominees. Sure, introducing memes, games, wax figurines and hilarious dance moves are an exciting progression in social media news, but, well, you know.

Last year, the only musician to make it to the final eight nominees was Taylor Swift. The prestigious publication will reveal the reader-voted winners on December 7, after which its editors will decide on the final winner on December 9.

Check out the poll and place your vote here.