As one of pop culture’s most effective chameleons, there are few guises that have not been assumed by David Bowie over his prolific career. From the historic show when Ziggy Stardust committed “rock ’n’ roll suicide”, only to be reincarnated as Aladdin Sane, right through his catalogue of pop, rock, jazz, avant grade… Very little has escaped Bowie’s attention or curiosity. Rumours of a new album from Bowie have been circulating for some time, both quashed and heightened by Bowie’s team shutting down one article that listed the various theories surrounding the release. Now confirmed, the album entitled “★”, or Blackstar, will be released 8 January 2016, and this week Bowie unveiled the title track along with the accompanying video.

Outdoing himself with Blackstar, the video is a ten minute long, intense portrayal of space, fantasy and the occult. With a new Star Wars on the horizon, Bowie’s futuristic dystopia in Blackstar may well keep you going until then. Opening with a scene of a long dead astronaut, sporting a smiley face patch, the narrative unfolds around the bejewelled skull, a woman with a tail, stark and shaking dancers, Bowie as both narrator and victim and strange rituals. Album producer, Tony Visconti has commented that ★ will be more truly avant grade than 2013’s Next Day, and it seems that the clip reflects Bowie’s quest for the new and artistic.

The track itself blends Bowie’s distinctive vocal stylings and slightly jarred melodies with even more jarring instrumental interjections and a beat that hints towards electronic music. The looming, cosmic melodies of the first part echo the lyric content; slightly manic mutterings about “the day of execution” and monastic chants and harmonies. Incorporating jazz influences is not new to Bowie, but on Blackstar this makes itself felt in the splashes of atonal brass and cymbal work across the more industrial beats and synths. Dancers shaking and jittering is disturbing and was apparently inspired by Popeye, however the image bears a striking resemblance to beatnik fanatics losing themselves to the music. Another stylistic influence that feels at home on Blackstar’s arrangement. 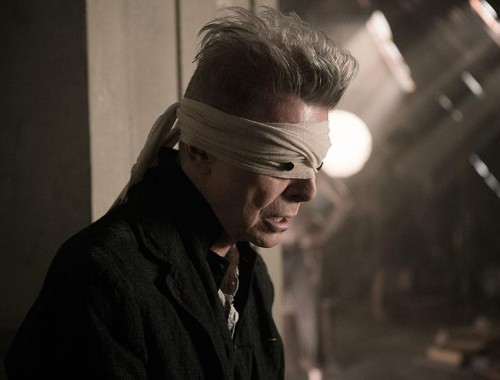 Breaking from the glitchy, jazzed out feel, the track falls into a more melodic style; incorporating cinematic strings and a vocal line that feels more like The Man Who Sold The World. And Bowie himself morphs into a more threatening character ready to “take your passport and shoes and sedatives”. Snarky little dance moves are accompanied by Bowie-familiar imagery of diamonds and death, all the while to the eerie, robotic refrain “I’m a Blackstar”. Building once more to the looming tone and returning to the original vocal refrain, a circle of women seem to call up a creature, using the astronaut’s skull, to torture three live scarecrows as they are crucified.

Directed by some time Breaking Bad director, Johan Renck, the making of Blackstar appears to have been a labour of love between Renck and Bowie. Filmed in New York and Bucharest, this intense and surreal video has set the tone for the full album and what we can expect from Bowie on ★. The feeling that there is a message buried within the multitude of imagery is unavoidable; the worn book emblazoned with a black star, presented by Bowie in a gesture reminiscent of past dictators, the futuristic despair and dystopia. Some have even mooted the idea that the dead astronaut is all that remains of Major Tom. Responding to these theories, Renck commented “I think that’s honestly up to anybody to take from it what you want. I certainly have my idea. I have a very firm idea of what everything’s about. But I’m not prepared to share it, because I don’t want that to corrupt your ideas.” Take a look for yourself below.