Again at the centre of a little bit of controversy, rapper Azealia Banks continues to make it hard to love her with her latest series of PR moves gone bad. The NYC artist recently cancelled a string of tour dates citing that she is “too busy” to go on the road, which is now the second set of cancelled shows in the last few months.

Hi guys, I'm very busy at work. Your coins will be refunded and I will be back in January. NYC, I'll see u on the 19th. XO – AB

The last tour was set to take place alongside R & B artist K. Michelle but was cancelled due to a conflicting schedule, and resulted in a signature Banks beef, complete with some nasty school yard social media mud slinging. 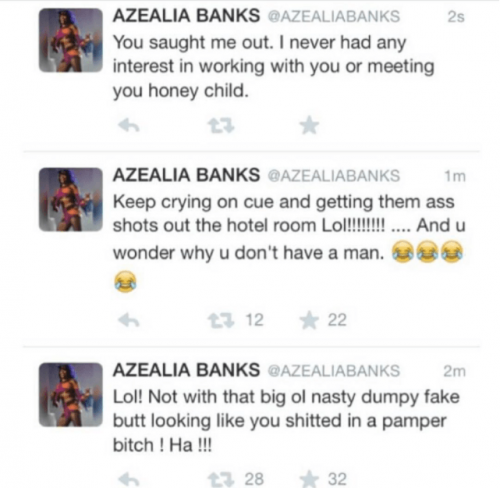 This is not the songstress’s first beef, believe it or not. The artist, who in recent times has become better known for her social media controversies than her music, has taken up similar arms against, ahem, Angel Haze, Iggy Azalea, A$AP Rocky, Action Bronson, Disclosure, Lily Allen, Eminem, Lady Gaga and Kendrick Lamar… you get the idea. In fact, with a list of enemies so talented, there is almost a case for an anti-Azealia compilation album.

After the recent show cancellation it has come to light via TMZ that singer and her entourage are being investigated by L.A. police after an assault on a security guard who kicked them out of nightclub Break Room 86. You can check out the video here.

If you are still on the fence about whether Banks is just misunderstood, maybe we need to remind you about earlier this year when she called an air hostess a “fucking faggot“, or slammed Australian audiences after her Splendour In The Grass performance, or agreed with Donald Trump’s take on immigration?

We want to like you Azealia. Stop making it so hard.