For anyone enjoying the comedy gold that Adele’s video for Hello has spawned (poor Lionel Ritchie), I imagine it won’t be long before a fresh wave arrive. But this time with America’s longest serving embarrassment, Donald Trump, on the receiving end of the call. Adele could be the latest in quite a long line of artists who have a message for Trump, after he reportedly appropriated her track Skyfall for use at a rally in Columbus, Ohio.

Apparently Trump’s interest in Adele’s music is also personal, as he attended her New York concert recently. In the spirit of generosity and equality (one that doesn’t feature in Trump’s persona, or campaign), there’s not much anyone can do to prevent him from liking any artist’s music. But soundtracking his presidential campaign is a bit of a different matter. Trump certainly isn’t the first politician to come under fire for using music without an artist’s blessing, due to the legality of music copyright it is fairly easy for artists to challenge this kind of public performance. Unfortunately for Trump, the music industry has issued those challenges fairly steadily.

Having already received notice from Neil Young’s management after he used Rockin’ In The Free World, Trump was told to “go fuck himself” by R.E.M  earlier this year and even his reported friend, Steve Tyler, requested that he not use Aerosmith’s Dream On as part of his campaign. Other musicians who are unhappy to be associated with Trump also include Smashing Pumpkins‘ Billy Corgan and Speedy Ortiz.

As these artists wholeheartedly believe that Trump’s ascension to power would completely fuck America, and by extension a lot of the world, their viewpoint is completely understandable. The use of these songs to soundtrack his political campaign is to draft these artists into his cause against their will. To lend an association to the songs that was never intended and to cash in on popular artists without their given support. Some might argue that this is appropriation of a song, rather than the artist. But the song is the intellectual property of that artist, they are inextricably linked. 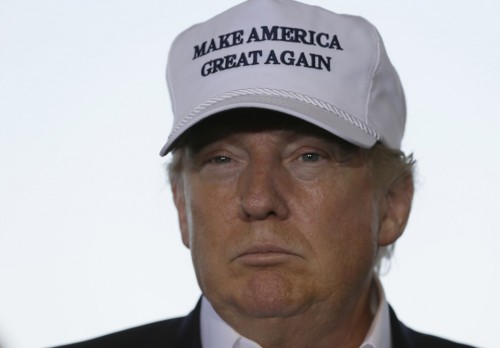 In Trump’s case, to become an unwitting asset in his campaign toolbox is to be held up as the call to arms for some fairly unsavoury beliefs. As his campaign continues it has been seen to normalise and incite racism and violence, increasing real physical danger for different ethnicities in America. While the internet laughed (quite rightly) at that hair, Trump slowly fanned the embers of a particularly nasty kind of prejudice. As his campaign draws comparisons to early Nazi movements, and the word “facist” is used with increasingly less humour, is it any wonder that these artists are angry? You also have to question the intelligence of a man who soundtracks all the above with songs specifically speaking out against such prejudice. With Elton John’s Rocket Man also reportedly used at recent rallies, I’m not entirely sure how that squares with Trumps anti-gay marriage stance?

Also listed were The Beatles’ Hey Jude and We’re Not Gonna Take It by Twisted Sister. So far none of the artists have made any comment, but I would guess it won’t be long before those are added to the growing black list of music available for use by Trump. Strangely enough, he has yet to make use of the one track specifically created for this exact purpose. Jack Black and Stephen Colbert’s My Kind Of America is ready and waiting; a rootin’ tootin’ bit of good, honest America. On second thoughts, maybe not Donald. Maybe Jack Black would extend his permission to They Fucked Our Asses?