In this age of instant, and usually online, gratification, the countdown is a rarity. So leave it up to old hands like Foo Fighters to appreciate exactly the kind of sensation it can cause. The band have sent online speculation through the roof with their mysterious homepage of a slowly ticking timer, set against an unusual background of flocked wallpaper and a canine figurine.

Contention is also rife as to the exact end date of the countdown, with various sources stating times anywhere between November 22 and 24. Now, if you’ve got your detective skills on, you should know that the Foo’s hail from the home of grunge, Seattle. Working from the relevant time zone (UTC-8:00 to be precise), we can confirm that the most likely result is 8am on Monday November 23 (local time). That sounds about right for an announcement, right? Which means anyone here in Australia should be logging on around 2am Tuesday November 24 if they want to see the mystery unveiled. So that will be hard core fans only, we imagine… 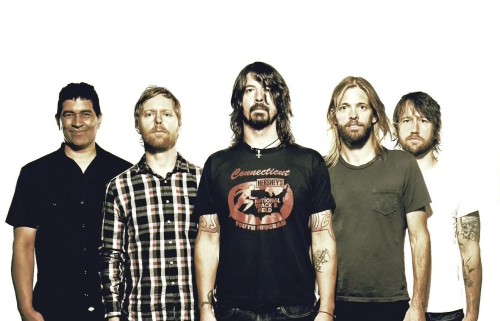 A quick scan of the internet shows up a number of theories as to what exactly might be unveiled. The most popular of which seems to be that the band will release the second instalment of their Sonic Highways series. Clearly we’re not the only ones with Sherlock skills, the main reasoning behind this one is the logo displayed on the countdown page. The sharp eyed amongst you will have noticed that it is not in fact any of their tried and trusted badges, but one that looks suspiciously similar to American interstate road signs which is also sparking debate as to whether Foo Fighters might launch a tour along the legendary Route 66.

Another top contender is the theory that the band will be bringing out a new album. Following a statement from Grohl at a recent show in Austin, Texas, claiming that the band “recorded five fucking new songs in your beautiful city”. Similarly, some have commented on the possibility of a live album.

And one more for you, the aforementioned canine figurine has been identified by some as a Foo Dog. A term applied to a number of asian dog breeds, and more specifically to these kind of statues, also known as “Chinese guardian lions”. For some this is a clear clue that Foo Fighters will be announcing a tour of Asia in the near future.

If you fancy your detective skills, or your supreme fan knowledge of all things Foo, take a look and let us know what you reckon it could be. Or else, put the date in your diary for the big reveal. Just don’t forget to check your time zones.