We hit up Queensland’s Red Deer Festival, and had the pleasure of catching up with Machine Age again. We chatted with Adrian Mauro about creating his fascinating music, falling off stages, and the Cowboys – the day before they won the premiership. 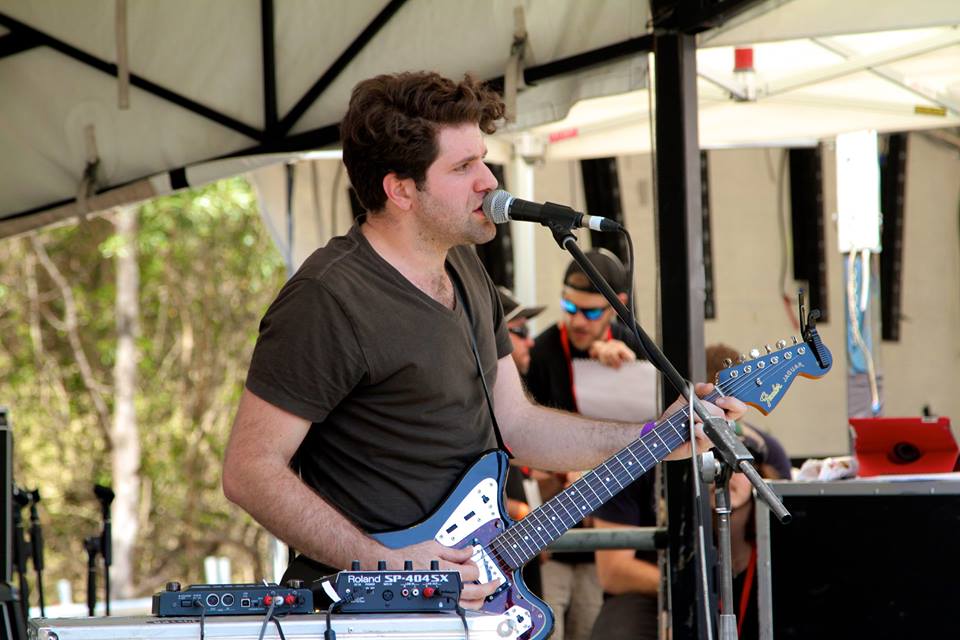 I was debating with myself.

It’s actually Italian, “mow-rrrro” if you want to roll your R’s.

You’ve performed a lot with other artists like Big Scary and Banff, was it always your intention to go out on your own?

Yeah, I’ve played for a few years in different bands, served my time. I grew up in Cairns, moved to Brissy to do music. I got more involved in the recording side of things which lent itself to working on other people’s stuff rather than my own. It wasn’t until a few years later and I kind of had an epiphany that I should be doing my own thing. That came in the form of having knee surgeory, spent a few weeks in bed and after that I finally started doing my own thing!

What did you do to your knee?

It’s a funny story. I play in another band called Silent Feature Era, it was actually our album launch and I fell off the stage. I was completely sober I must add, and I partially tore my ACL. I didn’t realise it until playing footy a couple of weeks later and then I totally fucked it.

But it was good, a good little moment to take stock and see where I was heading.

I love the story. Bedridden for two weeks, just you, a laptop, and your dog “Tux”.

It’s all true and I’ve still got the dog.

So you grew up in Cairns, and then after high school you moved to Brisbane, and went straight into audio recording?

It’s awesome actually! It’s a great place to grow up, spend a lot of my childhood running amok in cane fields with my school mates, building cubby houses! I loved it!

Where does the name Machine Age come from?

It was kind of weird actually, I’ve always loved, particularly recording, epic industrial sounds, but then my childhood nickname is ‘Age’ being Adrian, So I toyed with the name ‘Age’ but when I decided to do this project I decided to build everything around samples, beats and loops, so then I was like “Machine Age” that kind of works. It kind of ties in with my love of that whole industrial revolution but also a bit of my name’s in there or whatever.

So you have a lot of industrial influences – you’ve mentioned Aphex Twin and similar artists before.

Is it a bit refreshing to do your live show by yourself?

Yeah. So I’ve got samples, with a lot of my guitar stuff and vocals and the way I kind of build my set it’s not pre-recorded structures it’s lot of little elements that I build into a song so if I can see the crowd’s really vibing on a particular moment I can let that go longer if I want.

A bit improvisational then?

Yeah, particularly because I’m playing on my own I like to go off on tangents.

So Chivalry is the debut single, I caught your Black Bear session recording of it, it was great!

Yeah it was fun.

So tell us the story of how you came up with Chivalry?

Well it all happened around the same time, I’d just broken up from a long term relationship and was just finding my feet as a song-writer and a singer, it all kind of fell together and it was all kind of about getting back out there.

In the description of the song you talk about how in the single world the idiosyncrasies are interesting, how a smile will keep you buzzing for days.

Totally, when you’re newly single if a good looking girl just gives you a wry smile you’re like “oh my god!”

Exactly, so that’s where that came from.

Is there any out of the box influences that maybe people wouldn’t expect from you?

I don’t know. I feel like I wear my influences on my sleeve I guess, I always take bits of the artists that I like. For example once I come up with the basic idea for a song… I kind of never write a song with the intention for it to sound like a certain thing, it’s more like what does this song remind me of and then I might push it in that direction.

Feel your way through it?

Yeah, I’m really inspired by a lot of female a artists, Bjork, and Feist, her album Metals is an amazing record, I really love Sharon Van Etten.

Absolutely! So during that period when I was writing my stuff I was addicted to Tramp, and I got to watch her from side of stage at Womad this year, it brought all these memories back of this really formative time in my life and I think I was sobbing like a little bitch to be honest.

She’s phenomenal. So when writing you never really come to the table with a fully formed idea?

I guess because I only work on my own it’s very much like a “this song could do with Led Zeppelin drums”or Aphex glitchy beats,” particularly when I’m in that production space.

And that’s easier without a band I guess? Less arguments?

Kind of, you can start wandering in any direction. I always find when I’m listening to other stuff, I’ll hear one element and I’ll be like “what is that keyboard” and I’ll find any video I can and be like “Oh that’s that sound” and then I backtrack and figure out a way to put that into a different context. For example, I’m on a really crazy classical kick at the moment!

So you have an EP coming out soon then?

I’m not sure if it’s going to be an EP or a record at this stage, I’m just writing as much as I can and I’ve been playing so much this year and doing so much touring, which when you’re touring on your own really helps the writing process, for me anyway.

You’ve been playing a lot this year!

Yeah I think already this year I’ve played something like 28 gigs, it’s kind of crazy actually. 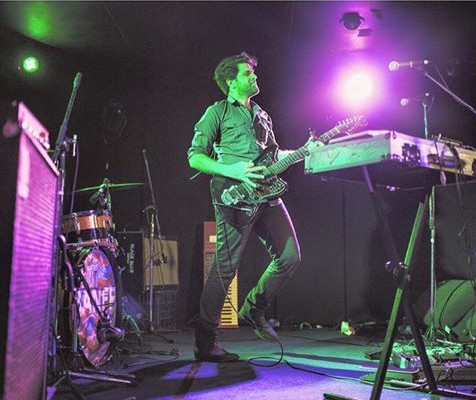 And which other shows do you have coming up?

I’m doing a tour with Ainslie Wills so that’s going to be awesome. We’re doing Melbourne Sydney and Brisbane at the end of October. Then also playing The End Of The Line Festival in Woolangabba which will be great! I don’t know if you’ve seen the line-up but there’s so many awesome bands!

Machine Age’s set was an absolute highlight of Red Deer Festival and everyone should make the effort to catch Adrian at his upcoming shows with Ainslie Wills for her Oh The Gold EP as well as The End Of The Line Festival!