In what was supposed to be an intimate one-off performance in Newcastle’s Cambridge Hotel, actor-turned-rapper Childish Gambino was apparently booed off stage last night. After turning up with a large entourage, it is said that Gambino spent the first 40 minutes of the show idling behind turntables as his friends, and even fans performed on stage.

Performing what appeared to be his only headline show as part of his Australian visit for Listen Out festival, Gambino was reportedly shocked at the negative reaction from fans. Just hours before the Newcastle show, Gambino cancelled what was supposed to be a second sideshow, in Canberra, citing that “his busy touring schedule taking a toll”. Perhaps the two are related?

Although as stated by one commenter on the Cambridge Hotel’s Facebook page:

“This was meant to be a DJ set, blame the hotel for misguiding most fans.”

The performance has left many fans enraged, and we’ll have to follow the story more today to find out if this is a gaffe on the part of the hotel, or promoters, and whether they misrepresented what the show was supposed to be, or rather if the touring schedule has taken too much of a toll on Gambino and is to blame for the underwhelming performance.

It’s disappointing to see the Listen Out brand disappoint fans twice this week alone with sound issues marring Melbourne’s performances. Especially for a festival that sits at the high end of attracting touring hip hop artists.

But one thing is for sure, fans spend a lot of money on seeing their favourite artists, and especially for teenage music fans who get very little opportunity to see the musicians they love, and they have every right to be angry about receiving a performance that was less-than-advertised. While no statement has been released by the tour agent or promoters, it does seem that now there is a growing selection of people who actually enjoyed the show and are dismissing the previous reports of an entire audience filled with angry fans, but rather paints a group of the fans as rude and aggressive.

It’s hard to know who to believe, but weirdly, both sides of the argument have a point.

Look at the difference in how the shows were advertised for Sydney and Newcastle. 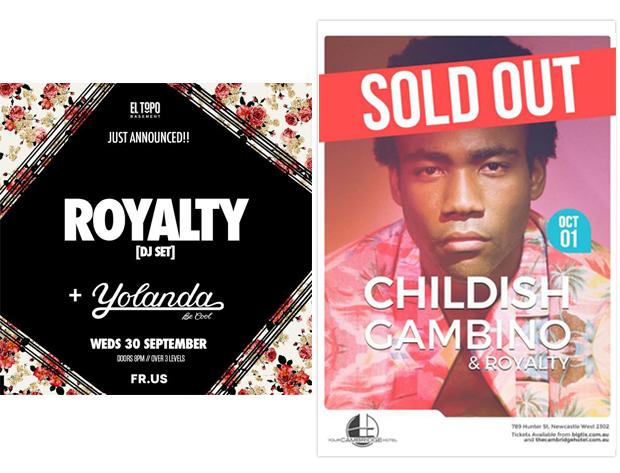 Clearly, the Newcastle poster would not make it seem as if it were to be a Royalty DJ set featuring Childish Gambino. Even now the anger is starting to be directed towards the tour promotors rather than the artist. And for those expecting a DJ set, they probably had a grand old time.

The Cambridge Hotel though maintains that the show was intended to be a Childish Gambino headlining performance and has stated that:

“We’re very disappointed,… Unfortunately we can’t control the artist, and on the night we said something but unfortunately nothing changed.”

This back and forth is sure to continue through the day, but here’s hoping some fans enjoyed the show and for what it’s worth, it does look like some were for 15 seconds or so here:

Posted by The Cambridge Hotel on Thursday, October 1, 2015