Second albums can be hard. We’ve seen more than a few bands crash and burn after an outstanding debut, left scratching their heads as to where they went wrong. Sydney’s Palms is no such band. In fact, they have managed to actually outdo their debut with seemingly relative ease. Titled Crazy Rack, the upbeat garage rock band has harnessed their in-your-fucking-face sound laid down in their debut Step Brothers and, with the help of their mate Owen Penglis (Straight Arrows, The Grates), they have built on it something that could be best described as “really, really good”. Showing off more sides to the band than ever heard before, the album is incredibly enjoyable from start to finish.

From the scuzzy, 60’s rock meets DIY garage opener Bad Apple to the mellow, almost melancholy No More, the thrashy minute and a half of Beatdown to the quite literal Sleep Too Much, Palms have taken their time to show there is much, much more to them then first meets the ear.

Having just wrapped up a tour with Last Dinosaurs on the weekend (see our photos of their Sydney show here), the boys are now set to embark on a whirlwind three date mini tour with the legendary Violent Soho. Kicking off in Brisbane tonight, October 22, then Sydney and Melbourne, before releasing Crazy Rack next week, it seems like it never really stops for Palms. Thankfully, frontman Al Grigg managed to spare a few seconds to chat to us about two drink theories, people’s perceptions, what it would be like to be a parent, the new album, and what’s still to come. Even more of a legend on the phone than he is on stage, Griggs is easygoing, realistic and determined, and is a testimony to just how far the band have come and how far they can still go.

What are you up to today?

I’ve actually got the day off! I got the day off work because I’ve got interviews in the morning and then we’ve got our first show with Violent Soho tonight in Brisbane, so we fly off in the afternoon. My boss was just like, “There’s no point in you coming in so just take the day off!”

A day in the life of a rock star, you know?

Oh yeah, totally. Getting the day off to play a gig from your boss of the second hand clothing shop you work in. That’s the true rock’n’roll dream in 2015.

It’s a huge deal, these Violent Soho shows. They sold out so quickly!

Yeah, the Sydney show sold out in like 15 minutes and the other shows sold out probably around the same time. It’s pretty mental.

Do you have any nerves kicking in when playing such a big show?

I usually get a bit nervous before a show. I’m kind of nervous because I feel like these shows can go either way. Sometimes you play a show and everyone’s really psyched and it’s awesome, but sometimes when it’s everyone’s favourite, favourite band and you’re just there in the way of them and their favourite band – that’s what I’m nervous about. If everyone just wants to party and is excited it’ll be a rad show, but it could just be like, “Who is this fucking band from Sydney I’ve never heard of? Get out of my face!” It could be kind of bad.

Well, I hope it doesn’t go that way for your sake.

Me too. It’s only been like that once where people were doing this hostile standoff. It’s only happened once of all the hundreds of shows we’ve played, so I feel like the odds are in our favour.

One bad show isn’t too bad.

One bad show in I don’t know how many. It must be one hundred at least.

I feel like it will be a pretty wild couple of nights. Do you have any pre-show rituals to keep you so psyched night after night?

Not really. Two and a half drinks is usually the perfect amount to kind of lose the nerves but also be on the right side of charming, before you become an obnoxious asshole.

I have a two drink theory for any serious decision in your life. You need to have those two drinks.

It takes away the nerves but you still feel in control. But, sometimes I’ve definitely been on the wrong side of two and a half drinks.

Sometimes it gets to six and a half…

*laughs* We played Small World Festival recently and I met my friend earlier in the day, I wanted to pace myself. It was a long day and we were playing in the arvo. I was doing really well having a beer then a water, but then I went up to get some food just before we went on and my friend was working in this stand and he pulled out this bottle of fancy Jameson that he’d been given. He told me to have a swig on it, so I had a swig and it was really good so I had a second swig – but then it tipped me over the edge. All my hard work all day! I was up on stage just like, “Yeah! I can do anything! I’m a god!” But after the first few songs I was like, “Oh shit. Not good. Bad, bad.” Turns out I am not a god, I’m not even a regular human right now…

Well, congratulations anyway on Crazy Rack! It is such a solid album, I have been listening to it all week.

Oh cool! Thank you, I’m glad you like it. It’s been a long time coming. We did a whole bunch of sessions mid last year, and we did a whole bunch of stuff but we weren’t really ready and it just wasn’t sounding right so we just thought, “Fuck it!” And we scrapped it. We went back in at the start of this year and we did a whole heap of stuff with Owen [Penglis] and this guy Nick Franklin, and it was actually a professional recording studio for most of it. I think it turned out pretty good.

I guess whenever you make something you go up and down about it like, “Oh you know what? It’s alright! Good work everyone.” But then you’re like, “Oh god, I hate this thing.” I wonder if parents are like that with their kids. If they’re all really proud and like, “You’re a great kid, I’ve done a great job raising you,” but then sometimes, “Fucking hell…”

Like when you come home drunk for the first time and they’re just going, “What have I done?”

“What have I done?! What have I raised?!” Sometimes I feel like that. I’m like, “Man, we are doing a good job, Palms. Congratulations.” But then I’ll be like, “Fucking hell. Look at us in this recording studio…”

“Including me, the guy that started the band”

I think Crazy Rack is good because it’s kind of like this extension from Step Brothers. I guess that’s kind of inevitable considering just how much experience you’ve had since then, but did it feel natural for you this time around?

It’s kind of funny. Originally it was just me and Tom, and when we started Palms we had all these demos for a different album. It was kind of going to be a bit more mellow I think, but as soon as we started playing live with the other guys, there was a certain sound that came and that really worked. It had a bit more of an energy. I think when you’re playing live a lot, you figure out the songs that work well live are the songs that stick around. We ended up dumping most of the demos we’d already done and we wrote Step Brothers over the course of six months to a year before it came out. With this album, some of these songs were written at the same time as Step Brothers, some after and some were off the first bunch of demos for this album. In a weird way, it’s about being a bit more comfortable and knowing not every song has to be this uptempo banger and you can kind of have a few more mellow moments, or things in the lyrics are a bit more important or just something is a bit different to the full on energy. I guess it’s just confidence to just be yourself and show more sides of the band.

I definitely agree there is a lot more versatility on the record. When you think about Sleep Too Much, to Rainbows to No More to Beatdown – there are a lot of different styles of songs on this album. Was this you flexing your songwriting abilities, Al?

I guess it all kind of falls into the broad category of “guitar based indie rock”. It’s not like we’re jumping from house music to DIY punk.

We’ll get some pianos and shit for the next one. All my favourite albums are like that. I like albums that have a bit of a range and it can work when you’re in a few different moods.

Albums that have the same really fast, upbeat tracks have their place, but I think albums like Crazy Rack are a more enjoyable listen all the time.

I definitely know what you mean. If you want to get psyched up you put on a high energy record, but if you want something you can continually listen to and it grows. One of those albums that your favourite song changes over time. I think that’s definitely something we were aware of. I think the next single is actually going to be No More, because I wanted to just do something people didn’t really expect. It’s so easy to get locked in as a kind of scrappy, garage band, but there is more to us, you know?

“We’re not just this band, there’s more to us”

*laughs* Some people just think we’re this party band, but we have feelings too.

Party bands have feelings too!

Everyone has to come down!

*laughs* Unfortunately. I’m really interested in how you described the album title and cover, like “crazy rack” could be a few different things, obviously. Similar to the name “Palms”, that is open for interpretation too as are quite a few of your songs. Is that something that you have always intended to do? Keeping everything open for the listener to interpret in their own way?

I don’t want to sound too flippant but I don’t really put that much thought into it. I don’t really sit down and think like that. I just try to be honest. I don’t use a lot of flowery language, I’m pretty basic about it and I think when you’re honest and allow yourself to be like that people can relate to that. They can slot themselves in and it is open for interpretation in that way.

Yeah. I think with the album title, it is open for interpretation but it’s more like what we were talking about before. This crazy rock’n’roll dream of sex and drugs and a wild, free life.

You’re 9-5 behind a counter at a second hand clothing shop just so you can pay your rent and maybe go on tour. “Weekend Warriors”, you know? I think that’s what I thought was funny, I think people hear the title “Crazy Rack” and they’re like, “Oh my god, what is wrong with this band?” but then it’s like, “Oh, it’s a gag, you’re not actually fucking gross assholes…” 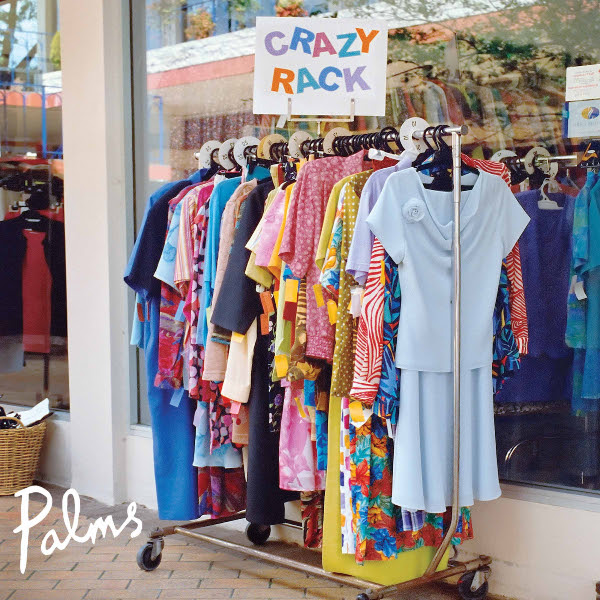 Crazy Rack is out October 30 via Ivy League Records.