City Calm Down may only be made of up four members, but their sound is that of a band of much greater immensity. Their 80s tinged indie rock has the ability to fill a room completely, enveloping a space with driving rhythm, shimmering synths and of course, frontman Jack Bourke‘s impressive and diverse vocal range. Tonight, with the very much welcome addition of a horn section, the band are playing the first show of their national tour to a home crowd at Melbourne’s Howler.

On stage, the four piece are unassumingly confident. The set opens with Bourke singing what one can only assume is the title track off their upcoming debut In A Restless House under a single, white light. Sometimes its a bit awkward, going to a show where a band performs songs that are yet to be released. This is very much not the case with tonight’s show. The performance is high on energy between the stage and the floor and the banter the members have with each other as well as the audience between songs adds to the charisma of their set.

A City Calm Down show is a particularly good one for fans of a top-notch lighting sequence. Rather than distracting from or overshadowing the music, the lights interact with the songs, acting as a fifth (of seventh, if you count the trumpet and saxophone) element of the act. The lights change colour and rhythm to fit the mood and tempo throughout a carefully curated set of songs both old and new. Sense of Self is of the former variety and a song that truly demonstrates the band’s prowess as electro outfit, sending bodies flitting around the room.

Rabbit Run, Wandering and Son are all cuts from the band’s upcoming full length debut and demonstrate a clear shift from those electro roots towards a more indie-rock inspired sound. Though those dancey elements still undercut the tracks (especially Son), these new songs also allow the band to show their growth and diversity. Much like the saxophone and trumpet players who have appeared a number of times throughout the set, it’s a pleasant and welcome surprise.

Rabbbit Run, the song which has been pervading airwaves ever since its release, gets a raucous response when it’s played, parred back by comparison to the rest of the set and Bourke’s voice near its most impressive. The song is only topped by Wandering, which comes next with its brilliant crescendo of a chorus and Bourke displaying a resonate baritone just as full and evocative in the live arena.

Dare rounds things off, riding the wave of intense energy that has built especially throughout the second half of the set. This is where everything culminates in an impressive display of musicianship and performance. The band have been tight the entire set – they are truly and naturally cohesive on stage: impeccably professional without a touch of being intimidating, overly rehearsed or stiff. The song ends, leaving the stage bathed in red lights and the applause holding out for a good couple of minutes.

It’s safe to say that City Calm Down are one of the most exciting emerging bands in the country right now. Their album comes out on November 6 – pre-order here.

Catch City Calm Down on the rest of their Australian tour: 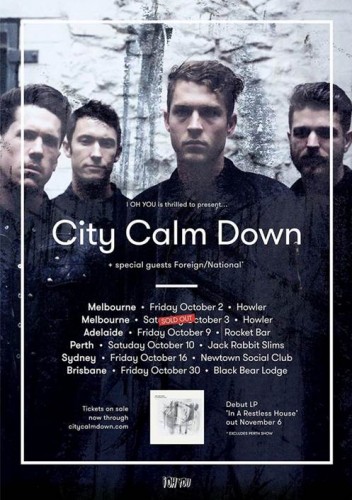