November is set to be arguably the biggest month in recent memory for pop music releases. While this isn’t a common topic of conversation around these parts, it’s sure to be a remarkable month for music news worldwide – and even Howl & Echoes is fascinated by the pop release megalith cornering the horizon.

The two biggest pop acts in the world – Justin Bieber and One Direction – are dropping their new albums on the SAME DAY (Nov 13). Billboard went so far as to design this excellent infographic: 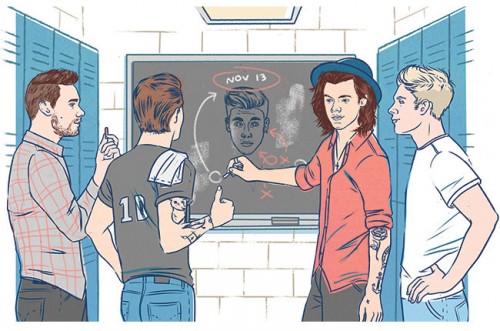 While I couldn’t give half a flying fuck about Harry Styles and his merry band of douchebags, I’ve been fairly vocal, in recent months, about my newfound Bieber appreciation – and the shame I experienced, having penned a series of highly critical articles about him a couple years back. As owner of this website and purveyor of what I like to think of as good music only, it’s not easy to admit it – but it’s true. And we’re slowly coming to terms with that.

No doubt it’ll be an interesting month for us music writers, and a heart-attack-inducing anxiety-explosion for the millions upon millions of excitable fangirls out there. Don’t hate on them, though – read our investigation into the phenomena here.

As Billboard also points out, it’s not the first time that two titans have gone head-to-head. Who could forget that when Kanye West and 50 Cent dropped Graduation and Curtis respectively, on the very same day? Fiddy reportedly announced that he’d retire from music if Kanye outsold him. Nielsen Music shows that, uh, ‘Ye sold nearly 50.1 million, flattening 50’s 691 000.

Justin Bieber has now released a new single from the forthcoming Purpose, on Drake’s OVO Sound. Apparently, anyway – the mysteriously anonymous SoundCloud page is known only as ‘assmaster’, which screams troll, of course. Strong features Selena Gomez too. But, and this isn’t really surprising anymore, it doesn’t make us cringe. It’s emotive and relaxed, a gorgeous mix of lazy guitar strums and breathy, angelic vocals from the two pop starlets. Sensual and stripped-back, the understated atmosphere almost feels flitting and impromptu – an impressive feat for such clean production.

You can now pre-order Purpose on iTunes, and you can now see the full writing credits for each track. Some big names feature – Skrillex (Sonny Moore) is credited no less than four times, alongside Big Sean (Sean Anderson), Travi$ Scott (Jacques Webster), and even the legendary Nas (Nasir Jones). Check out the full list here.