In October 2011, Australian singer-songwriter Kate Akhurst was visiting Stockholm and by chance, was introduced to Swedish trio Rocket Boy (Markus Dextegen, and Hampus Nordgren and Oskar Sikow) in a bar. There was an instant connection; an immediate alignment that led them straight down to the studio that very night to record a song together, Northern Lights. It was this song – and the unexpected fusion of Swedish and Australian culture – that would form the distinct sonic blueprint of Kate Boy; a palette blending the kaleidoscopic electropop of Scandinavia, unrelenting industrial rhythms and booming choruses unapologetically belted out by Kate’s piercing voice.

This November Kate Boy releases their highly anticipated debut album, ONE, which follows this year’s earlier releases of the commanding, sun-soaked single Midnight Sun and Triple J favourite Self Control. ONE is self-produced and was recorded in Stockholm, an undeniable musical epicentre churning out some of the most distinct contemporary pop music around (think Robyn, First Aid Kit, Say Lou Lou). ONE leans heavily on hand-spun vintage synths (they used a Fairlight CMI from the late 1970s) to create a backbone of warmth and brightness, and overlays layer after layer of irreverent, reimagined pop melodies in what will undoubtedly be one of *the* pop albums of the Aussie summer.

We spoke to Kate Akhurst and Markus Dextegen, based in Stockholm, to find out more about Kate Boy’s debut album ONE, how culture influences their musical sound, their upcoming plans for spending summer in Australia (which is very likely to include an early 2016 tour!) and how Kate Boy itself – the fictional extra member of the band – helps to challenge and antagonise the group to push themselves in new directions.

K: Hi! I’ve got Markus here with me. We’re doing really good thanks!

Two for one, sweet! Well, congrats are definitely in order for Kate Boy – it’s probably been a busy few months for you with the release of Midnight Sun and preparing for the release of your debut album, ONE. How’s that been?

M: It’s been crazy, it’s been fun – stressful but fun. But then again I think it’s been like that for two or three years for us. If anything we’re getting used to it now!
K: If anything I think the last few months have been the most relaxed. I think from the beginning, from one song, we’ve been launched into this world and immediately took off online, and we got so many amazing opportunities to play live, and we were just scraping by and ready for that. We started practising all the time, getting the live show ready, kept going on tour and coming back, kept writing songs and pulling the album together, releasing each single at a time… and now it’s done!

M: It’s the first opportunity to have a break.

K: And the first opportunity to really talk to people, like you! It’s been really nice.

That’s awesome to hear. So, debut albums are a pretty important moment in a band’s career. With ONE, what did you want to get across? What was important to you to put out in the world?

K: I think the most important thing for us was just to feel like we had our sonic blueprint. It’s the first album; it’s the thing that you go into the world with and say “This is us”. We wanted that captured entirely on a record and that’s why we included the first songs we ever made – those were the ‘seed’ of Kate Boy and then it kind of evolved through touring and over the years in the making, and now it’s done! We really wanted to capture that progression from the first day we met; we wrote Northern Lights the first day we met and that’s on the album. It was really a show of our journey together from the very first moment we met and that’s kind of important for us.

M: I feel like the album is like us building a house, and now we’ve finished the house and we can live in it for a while.

You mentioned your sonic blueprint and I think Kate Boy is so unique, it doesn’t sound like anything in the Australian Indie scene. It’s got that clashing of 80s sounds with those industrial rhythms and those booming choruses. Do you think that’s a by-product of the Swedish pop scene and all those influences there, or is that something driven internally by the band?

K: It’s a good question. I initially came to Sweden because I loved that music, that Scandinavian sound. I’ve always had that in my bones, I just love it and why I found the guys, I think. It definitely has the Swedish influence to it. But I’m Australian and there’s no way of getting that out of me, so I think it doesn’t 100% sound like the Swedish sounds either. I think there’s maybe a blend that makes it something a little different from other things around.

M: I think we’re so different as musicians and that creates that end result, where you have a mix between some different sounds and that’s one of the reasons we love making music together, because we have so many different aspects to give to each other when we’re making music, rather than working with someone who does exactly what you do. It’s so much more inspiring to work with an Aussie that has a completely different mindset of how to approach a song. It’s really fun to work with. I would imagine that most artists would really feed off working with someone who has a different approach to their work, it makes it really fun and it feels like things are happening quite spontaneously; which is the whole core of making music, to spontaneously create sounds together. It definitely helps to mix and match people from different parts of the world.

Taking Higher as an example, why did you decide to centre some of the themes of the album around self-empowerment and equality, or trying to bring people together as this one bundle of energy. Is that a theme that’s consistent throughout the album?

M: It’s consistent in the sense that the album definitely has that in it, it’s a very important aspect of it, but not every song or every line has it. *laughs* But it’s definitely a core part of the album, absolutely.

K: One thing I realised subconsciously that we’ve done is that everything really is about connection and from the beginning that it’s been like that. And now every song when I look into it, it’s about connecting with each other. Even the album title ONE, it’s trying to tap into that as well and I think that through touring so much we really got to experience meeting so many different people. So many people would come up to us after a show and explain what our songs had meant to them, and what happened in their lives, and that was really touching. When everyone is singing the lines together in the room, you really bundle that energy together and it brings such a deeper meaning for us as performers, getting up every night and singing the same songs over and over again. Because the songs have a deeper message it gives us purpose and inspiration to do this, you’re not just doing it because you feel like a rock star. It’s about getting up and sharing an experience that makes you feel better and I feel in these songs that’s why those themes come together. Our audiences have inspired us through the connections we’ve had with them early on.

I want to ask who Kate Boy is, this fictional fifth band member and a bit of an androgynous character. Do you think she or he is the antagonist of the group and is she there to challenge you to think differently?

M: She or he is definitely there to challenge us.

K: That’s how we answer every problem that we can’t find a solution to, we say “What would Kate Boy do, or think in this situation?” It’s the higher mind of us all, the better version of us we feel.

M: All the good sides but none of the bad.

K: We definitely use her in that way often.

Can you tell us about the unique visual aesthetic, the album imagine really grabs you. Is that Kate Boy?

M: That’s definitely Kate Boy, that’s Kate’s head. We scanned her head in a 3D scanner. That piece is created around her scan.

K: You’re right though, Kate Boy is both. That’s what we like. It does represent everyone, too. But yes, it is my head *laughs*. We really like that feeling of evolving into something more, more than just a human. We all have to step outside of ourselves and find that place where we can let go of all the baggage and preconceived ideas of people that we have, so that’s what those images represent. 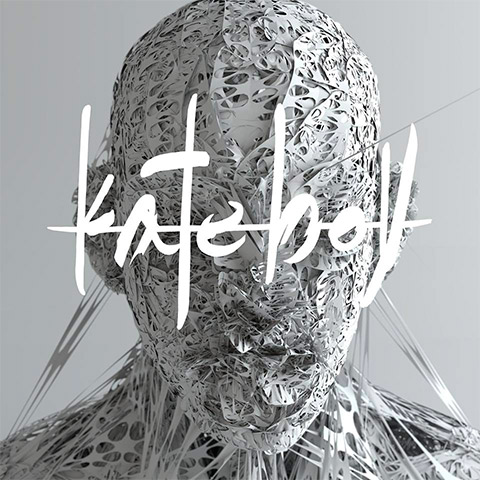 Kate, I know you’ve said you don’t necessarily want to commit to concrete plans and want to be quite open to everything. But if you had a hope for where Kate Boy might be in three years time, what would things look like?

K: That’s hard! We really try not to think like that but I would be sad if we couldn’t keep doing this in three years time but I also want to trust the natural flow of life, so if that weren’t to happen I hope that that would mean because something else was in my life.

M: I would hope that we inspired other people, even if it’s for people to start making music on their own and start seeing dreams in front of them, and become happier people because of it. Regarding success… I think it’s so hard to measure. If we took it as ‘how many people are listening to us’ or commercial success only I think we’d be losing so much of what makes us happy. It’s a much bigger part of it; but inspiring others would make me very happy at least.

Finally, a key question for us Aussies: are you going to tour Australia anytime soon?!

K: Yes! We’re looking into it right now. We’re coming over for Christmas and New Years, we’re going to spend the summer there and get away from the Swedish snow. We’re going to come for a couple of months and we’re trying to book some shows early in 2016. Hopefully in a few weeks we’ll have something set.

Now that is some epic news. I’ll wrap up there – Markus and Kate thanks for your time!

K: Thanks for giving us your time.

ONE will be released 6 November 2015 digitally and on CD and vinyl LP via Caroline Australia | Fiction Records. Order it here.