As reported by The Verge, it seems that if an iPhone user is not using Apple Music, Siri will limit its capabilities and accessibility to items like music charts and artist information. Check out these screenshots (disclaimer: I tried to make my own, but I forgot to cancel my subscription after the three month trial and was automatically charged for another month – so mine worked fine.) 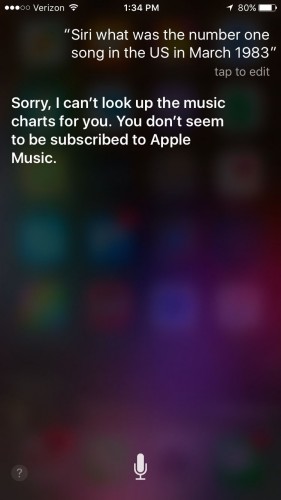 I guess Siri won’t talk to you about music unless you pay her boss? pic.twitter.com/b6Xwcf3EYR

As you can see, it turns out that Apple are acting in a fairly sneaky way to maintain their audience – perhaps this is the result of a huge dip in users, following the end of the three-month free trial.

While it was no secret that Apple Music has been tied to Siri’s musical answers since its launch earlier this year, it sure is strange and unimpressive that they’ve gone so far as to withhold the information from those who don’t use the service. It’s kinda like saying that unless you have a car, you’re not allowed to know what the price of petrol is. And that just doesn’t make any sense at all.