Hopsin is outright not happy with the state of hip hop. He has on countless occasions said that most rappers “suck” and their music is “garbage,” and I’d like to think that many hip hop heads agree. In Hopsin’s “ill mind” there must be an endless ticking frustration, and maybe this is why he doesn’t do collaborations outside his Funk Volume family. In a plot to do something about the lack of real MCs he offered up a challenge: $500K rap battle, Funk Volume vs. anybody, in hopes of firstly, winning some money, but drawing out some talent from the trenches of today’s hip hop. Or perhaps he wanted to prove once and for all his point, that “rappers these days suck.” But no one stepped up. Well, one group did, The Horseshoe Gang, but they didn’t offer up any money, just made some diss tracks and posted them online. It must be hard being one of the best MCs in the game and being forced to use The Horseshoe Gang’s disses to towel off after his dope new album, Pound Syndrome. Or as he put it, to “warm up” for what is next.

Why won’t anyone step up to the challenge? Are they scared? Is Hopsin just that good? Or is it like he said in his skit No Words? (now featuring a hilarious film clip.)

I got on the phone to Hopsin and asked him what was going on.

Have you had anyone step up for the 500K challenge yet?

Oh nah, nobody took the challenge yet and I don’t think that they will. I wish somebody would, though.

Do you think people got scared when you tore The Horseshoe Gang apart?

Oh (laughs) maybe they did. It was dope and it was fun. We can still go a lot harder, that was just a warm up.

I could hear the wind blowing into his phone, and just as I started my next question, Hopsin said:

I’m sorry, I am in an emergency right now, and I really have to get off the phone cause I’m in the middle of no where and I am going to be stranded.

Sorry, I have to hang up.

45 minutes passed until my phone rang again. I answered without looking, figuring it was work related.

I’ve got Hopsin back on the line.

Hopsin, how you doing? Everything alright?

Yeah, yeah, I’m sorry, I apologise, my phone was dying and I was stranded in the middle of Chicago and I didn’t have a way to get back. But I’m at my hotel now. I’ve got my phone charging. So yeah everything is good now. I apologise.

I picture him sitting on the floor near a powerpoint, like at the airport when your cable won’t reach. Thirty seconds of apologies and ‘no worries, mans’ followed before we got on to questions again.

The reason I took to your music, man, was you are one of the few rappers in the past five years who still has bars. Which rappers in the game do you have respect for?

I respect a lot of the old school dudes. As far as new guys go, I respect Yelawolf, I respect Kendrick Lamar, J Cole. I like Logic, of course the guys on my label Jarren Benton, Dizzy Wright, that’s just naming a few I guess.

Is there anyone you want to battle? Anyone of equal measure?

I’d battle anybody to be honest. I mean, I am not a battle rapper, but for that 500 thousand dollar battle challenge I put up, I’d battle anyone. But I don’t really care to battle like that – I’m not scared of anybody. I just don’t wanna say any names, but I’ll battle anybody.

Are there any rappers you’re thinking of collaborating with? Or do you just keep it in the Funk Volume family?

Next year I am actually thinking of doing more collabs, but I have to talk with some people first. But yeah it’s a possibility.

It’s slowly starting to come back, but there is still a lot of garbage out there. But I think it’s for sure making a come back – there are a few rappers who are coming out who are real MCs and others out there poppin’ up here and there. I can see the change coming.

Awesome – I am looking forward to that change.

Have you heard much Australian hip hop?

I’ve heard quite a bit of Australian hip hop; I know 360, he has a lot of dope songs and lots more, I just don’t know names.

Do you think any Aussie MCs could step up to your challenge?

I think anybody can step up to the challenge if they have the money, that’s what it comes down to – and that they are willing to risk it. ‘Cause having the money is one thing, and being able to talk, but risking it is another thing. I’d be willing to lose mine. I know I wouldn’t, but I’d be willing to.

I’m pretty keen to see that battle so I hope somebody steps up.

Yeah, yeah, it’s all good if they don’t though. 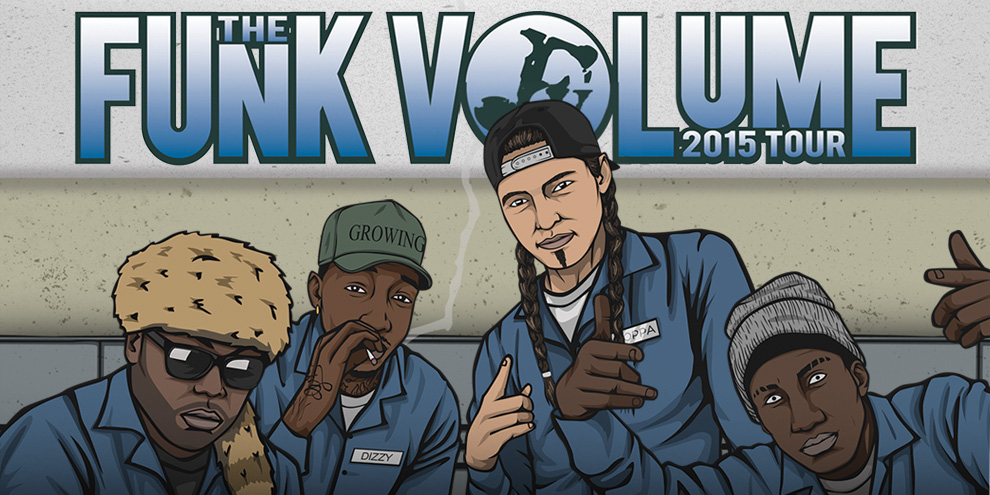 Hopsin and the Funk Volume crew are currently touring and will hit our shores in the middle of December. In a pre-album-release-social-media-stunt, Hopsin said he planned to quit rapping and move to Australia. Although he makes no signs of quitting rap, the latter part holds some truth – if his girlfriend lets him, he may just move to Australia. I wanted to check out this possibility.

We are looking forward to having you come back to Australia.

Yeah, I can’t wait to come back.

Since that little stunt you pulled before releasing your album, I guess you’re still rapping and not looking to move to Australia anymore?

Oh, I am probably still going to move there, but I’ll live in [both] LA and Australia.

Which city would you pick?

I kinda like Perth, the Gold Coast and Sydney, I haven’t decided. I have to talk to my girlfriend.

You should try to swing her round to Melbourne.

Nah, I don’t like Melbourne too much, I mean it’s cool but I’m not sure about it. What city are you in?

Oh cool, Melbourne. Hey, is it ever hot in Melbourne?

Yeah, but it changes by the hour.

I mean right now it’s hot, but I bet in a couple of hours those clouds will come through. So pack for all occasions when you’re here.

Yeah (laughs) you see I like hot, I’m from California, so I need my warm weather.

I guess Perth is the spot for you then.

So, Perth, make sure you show him a good time. Perth is the last stop on his Australian tour, so you will have your work cut out for you (well, I guess not as much as us Burn City folk) as our all cities will surely be trying to persuade his missus that their city is the spot for them. And who knows, maybe then an Australian city can get a song like Fort Collins written about it (minus, you know, him bailing on the show).

What did it mean to make a track like Fort Collins? How did the people of Fort Collins take to it?

The people from Fort Collins, they liked it a lot. It was hard to make the track, I had Dizzy on it and wanted him to kind of yell at me and talk to me like he was upset at me. I was trying to figure out how that was going to happen. I had to have a talk with him and kind of organise the song in a certain way. I think I did a good job. When I walked away from the show that night, I knew that I wanted to make a song about it. I wasn’t going to leave Fort Collins hanging like that.

You can really feel the sincerity in the song, it came off well man.

As you develop and produce more and more music, do you find yourself in need of a little reinventing? Like you say in the Ill Mind of Hopsin tracks?

Yeah, I’m constantly thinking about what I am going to do on the next one, if I do one, so I am always thinking of the next sound and making things expand, so maybe 2016 I might do another one.

So come on Straya – insert relevant Sam Kekovich line – let’s have some of our home-grown MCs step up for that $500K.

Here’s my dream squad for the occasion: Pegz, Reason and Hopsin’s boy, 360. I reckon they’ve got the skills to take his money and then use that money to buy Hopsin a (relatively) beachside property. $500K won’t actually buy him anything, but it’s the gesture that counts.

Be sure to check out Hopsin’s new album Pound Syndrome and catch him and the rest of Funk Volume when they get here in December.